After spending much time underground in Phong Nha-Kẻ Bàng National Park, we were in need of some altitude again.  Continuing South via Dong Hoi, we arrived at Huế – the old capital of Vietnam from 1802-1945, during the Feudal Nguyen Dynasty.

At the heart of Huế, surrounded by the Perfume river and 2 moats is a huge 19th-century Citadel – full of palaces, shrines, gardens, pagodas, golden dragons, bonsai and tourists (and back in the day, elephants and tigers). 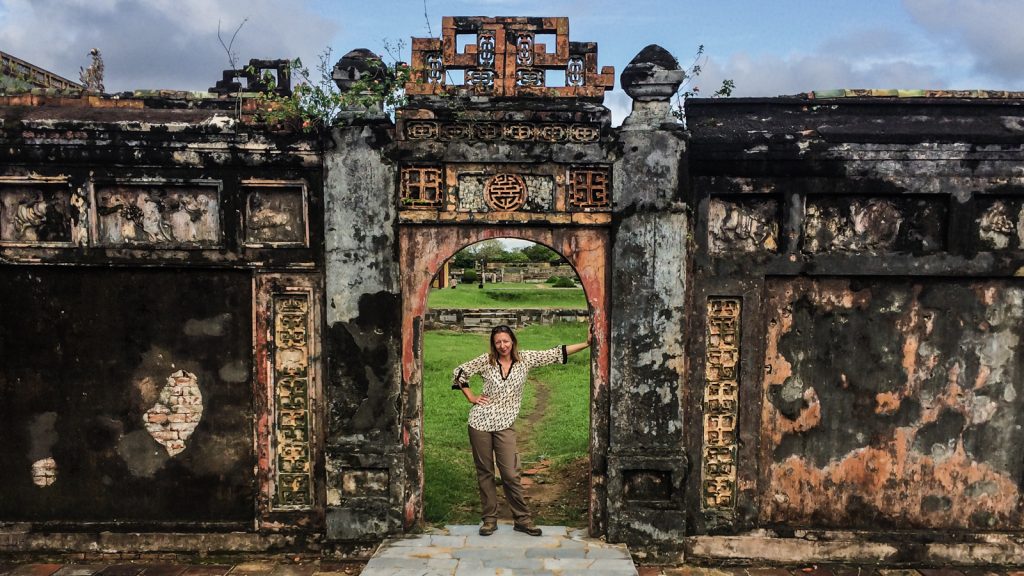 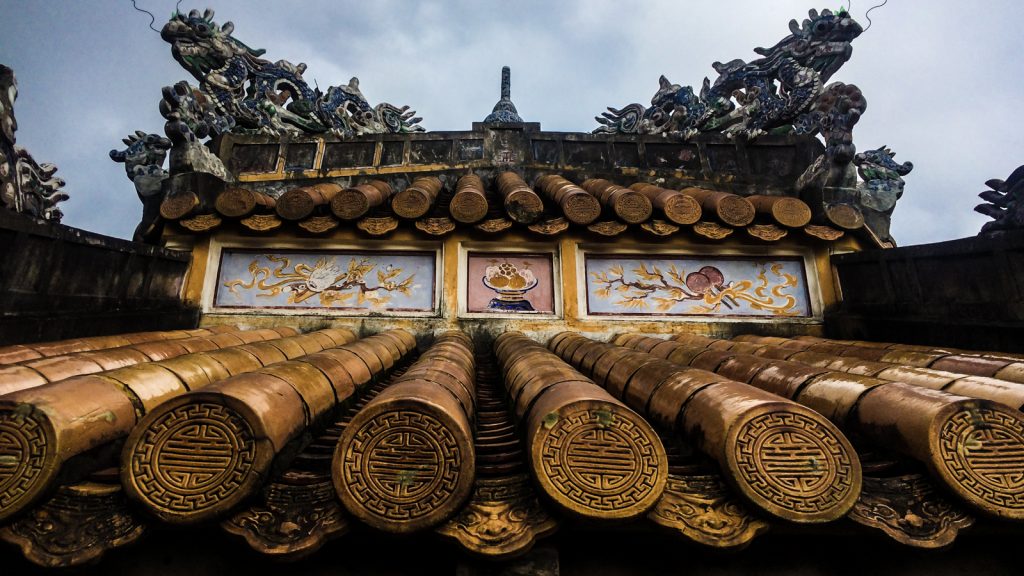 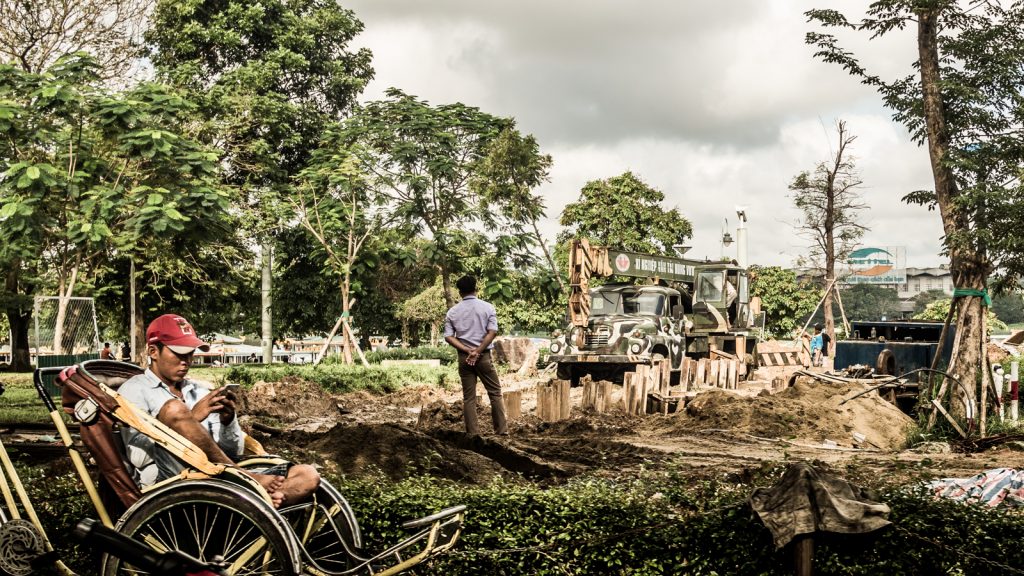 Following the American war the communist regime viewed the citadel as a relic of a feudal dynasty – the damaged city was left to crumble with the ideas that it represented. There has since been a change of thinking and restoration work continues today. It is hard to tell what has been restored and what is original – a testament to the skill and effort being applied both then and now.

The usual alternating advertising from A) best Pho Bo soup in town and B) Viettel or some other mobile network results in a continuous sprawl of cyan, yellow and ever bolder lettering, perfectly punctuated by the adrenaline-inducing air-horns attached to the trigger fingers of every passing driver with four wheels.  I’m quite numb to it now, but on a bike you’re quite exposed – it really did take a some getting used to… Having been here for a while, most of these signs do actually mean something to me now. More importantly, I now understand that whatever they advertise probably doesn’t represent what the establishment (someone’s garage) has, and that they almost certainly have what I actually want.

Unlike this modern visual pollution, the mosaics of the citadel are beautiful.  While I have no idea what the old characters say, I have no doubt it is something about soup. or karaoke. 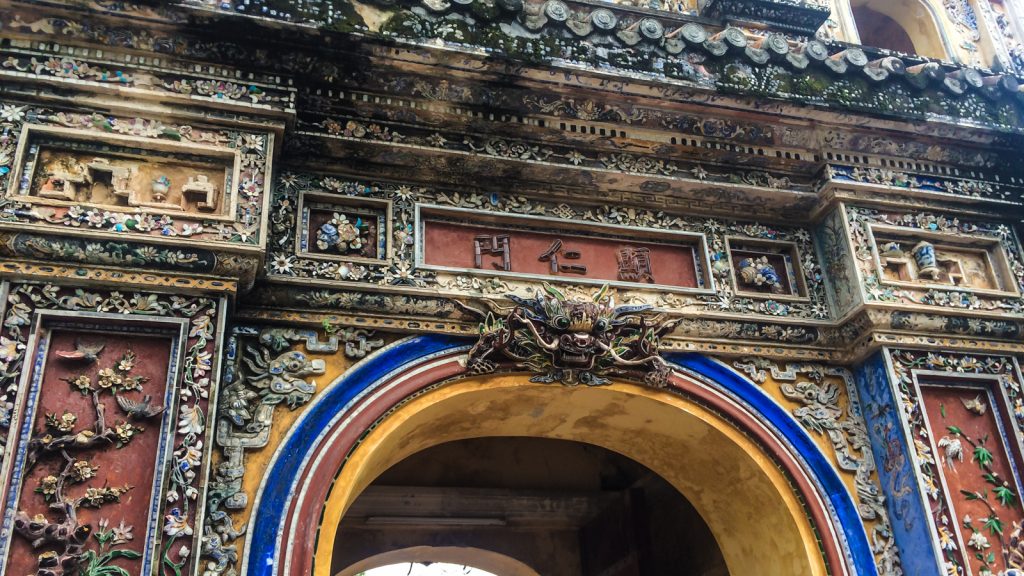 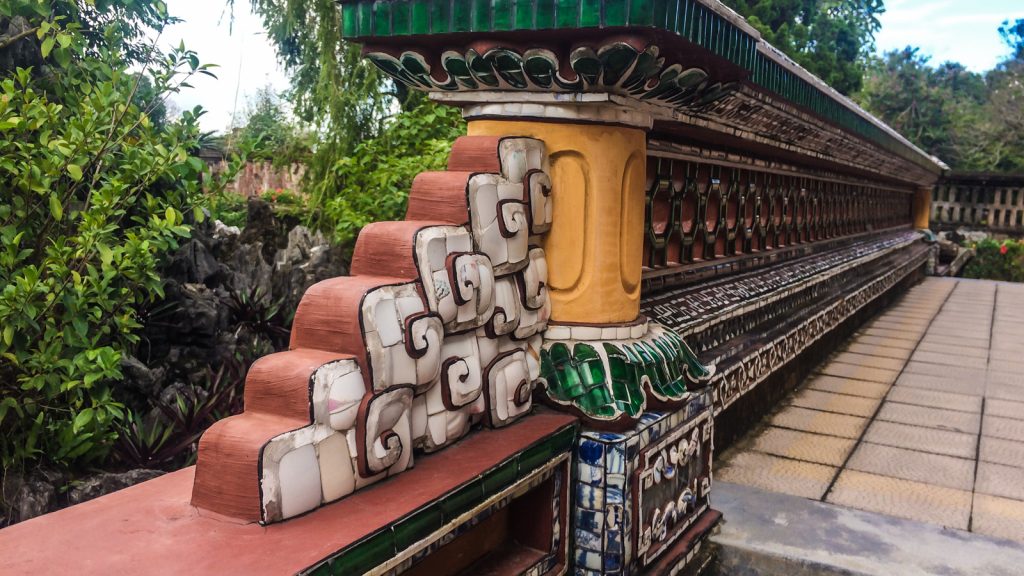 While in Huế, we spent a little time hanging out with some Vietnamese boaties – aboard their dragon-headed boat, they took us for a ride on the Perfume river to see the city lights of Huế. We bonded over the joys of living on a boat, discussed the maintenance demands of a wooden hull (by sign and gesture, of course), and we helped fund the repair of their next leak by willingly diving into the inevitable shopping opportunity. Pop-up Christmas cards, tick.

The road without Joy

From Huế we headed south along the “Road without Joy”, named by the French because they kept getting ambushed by the Viet Minh here. We passed through safely and began our ascent up the Hải Vân Pass (“ocean cloud pass”) – a stunning mountain pass overlooking the South China Sea, with not a single Top Gear presenter in sight. – this is where they did one of their things, you know, where they offend an entire country for kicks. A bit like Boris.

We climb the high pass. We’ve been at this a while, so it turns out to be easy, but really hot. We make it to the top in short stints between patches of shade and spend most of our time waving at passing moped pilots who can’t quite believe what they’re seeing. 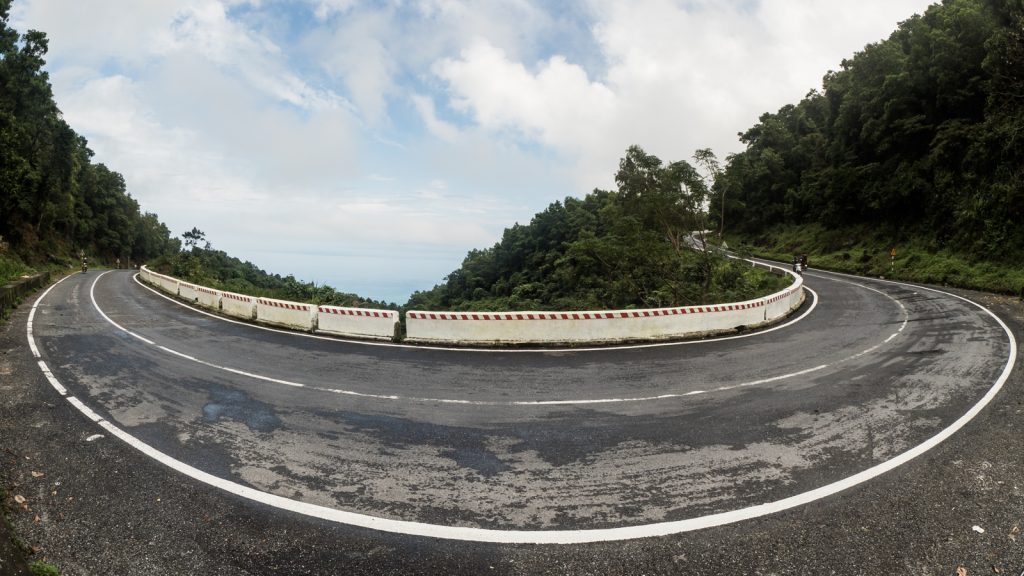 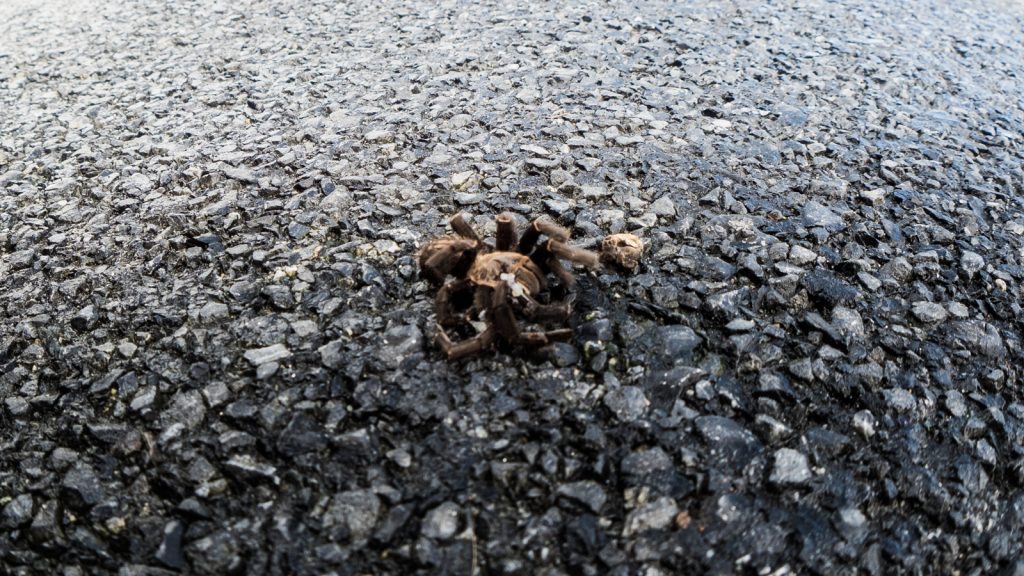 The recently built tunnel beneath us carries most of the heavy traffic on highway AH1, making this mountain road an oasis of calm – it’s just us, some mopeds and the occasional fuel truck. Deep into our travels through this sea of tranquiity, just as we gain the summit we find a island of chaos, noise and carnage: shopkeepers shout for attention, coaches manoeuvre for no reason, mopeds fly past strafing bystanders with their horns and tourists bounce around aimlessly in a brownian fashion. It’s pretty intense. We have a drink, cool down, say “Không, cảm ơn” a lot, and leave as soon as we can.

The man who isn’t Boris was mostly right about this place: “a deserted ribbon of perfection—one of the best coast roads in the world”. From the peak looking South it really is a charcoal ribbon that sweeps down the mountain and downhill all the way to the horizon. This is going to be fun. Gravity propels us South for what seems like an hour, screeching around the sun-baked tacky tarmac of the red and white fringed hair-pin bends, grinning at the view over the ocean and overtaking all the tourists on their rented scooters, much to their surprise and my enjoyment. 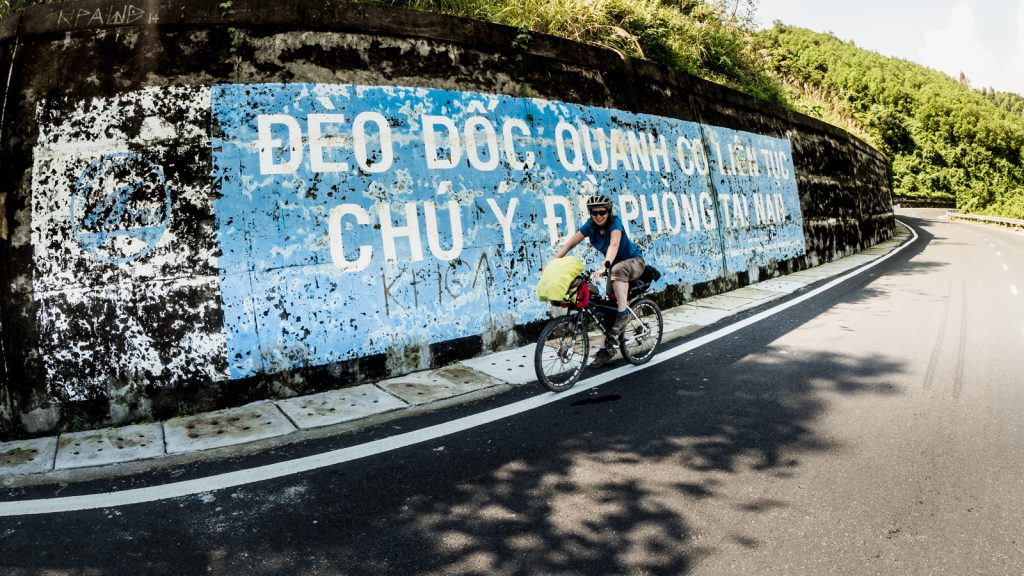 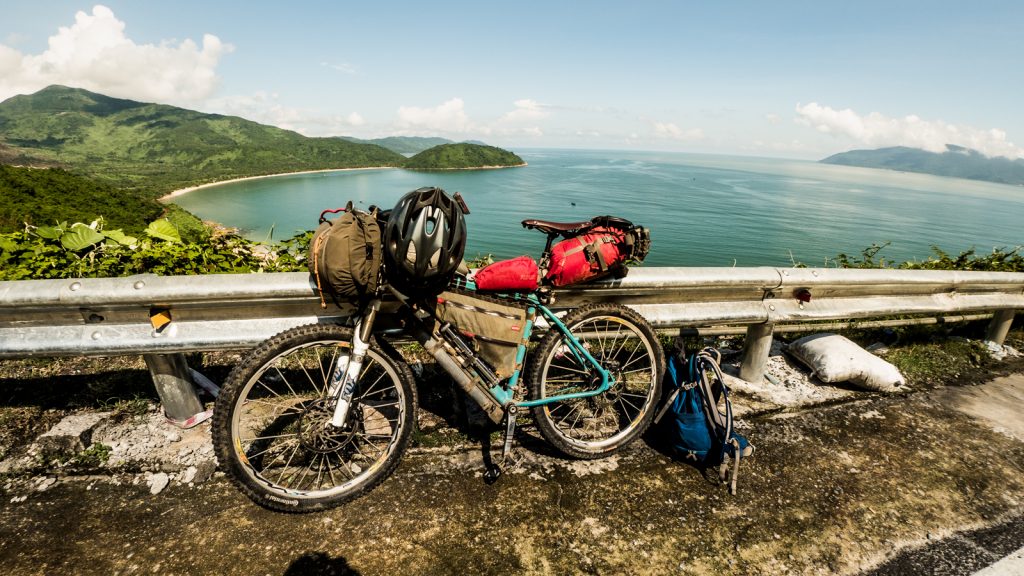 We manage to carry some speed through all the way into the sprawling city of Đà Nẵng, Vietnam’s fastest growing city. We did think about stopping here because the peninsula to the East is a very unique nature reserve – the wildlife here survived the brutal American attacks of bombs, Napalm, Agent Orange, M14 “toe popper” and M16 “Bouncing Betty” mines, in a way that was not possible in many other regions of the war stricken country. We had already had a long day but we weren’t in the mood for a big city and didn’t quite have time for a 2-3 day stop required to explore properly, so we put it on the growing ‘next time around’ list and pressed on to Hoi An, another 40km in the full heat of the day… 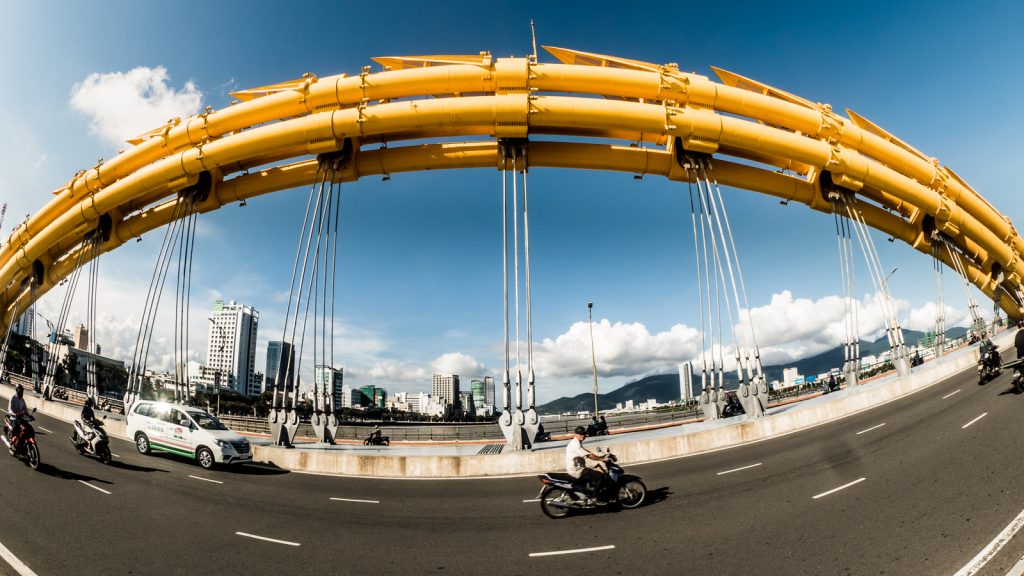 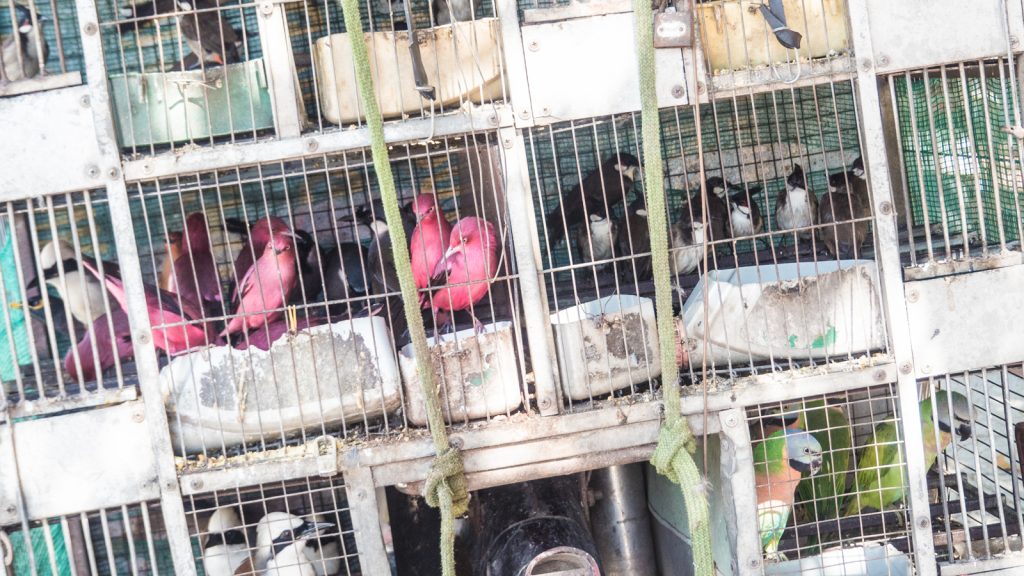 One thought on “Hải Vân Pass: enjoying gravity in Vietnam”