We check the weather forecast again in Yak Kharka. Regardless of which site we look at the message is the same, just 24 hours remaining before heavy snow starts to fall in the valley we are trying to escape. We had planned to take two full days to make the pass from here and I am not sure just how much faster we can go, pushing 25kg of bike and luggage up massive mountains is taking its toll. Gez is more practiced at carrying his mountain bike than I am and I’m all too aware that this is going to cause us some unavoidable problems when we reach the pass. The track from Yak Kharka to Thorung Phedi starts well, climbing quickly and then easing off to the point where we find we can ride it. 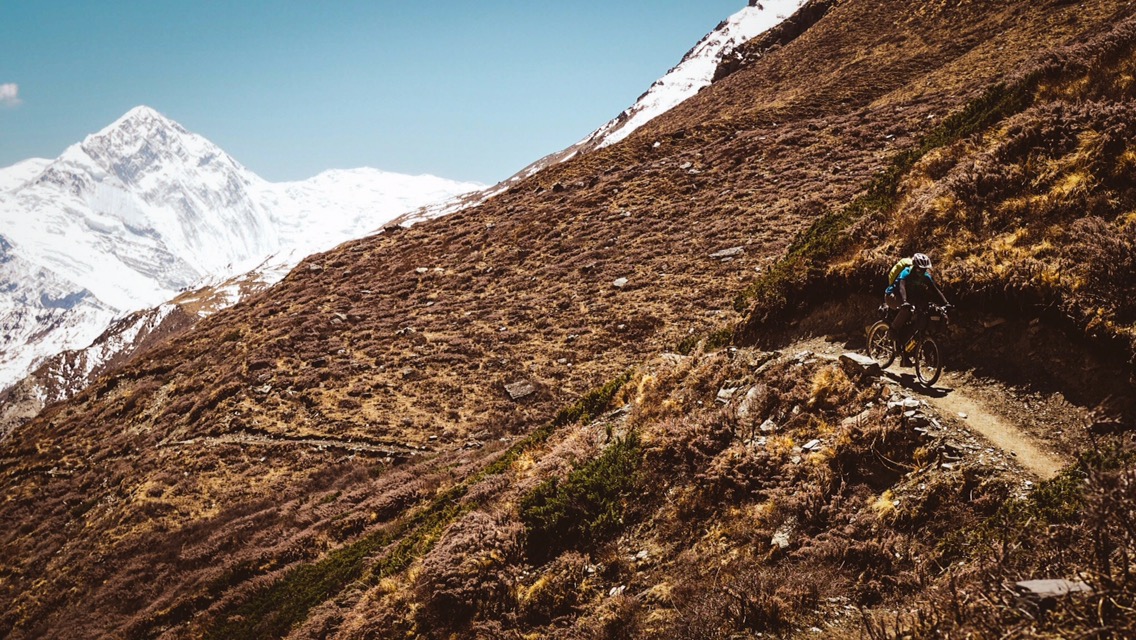 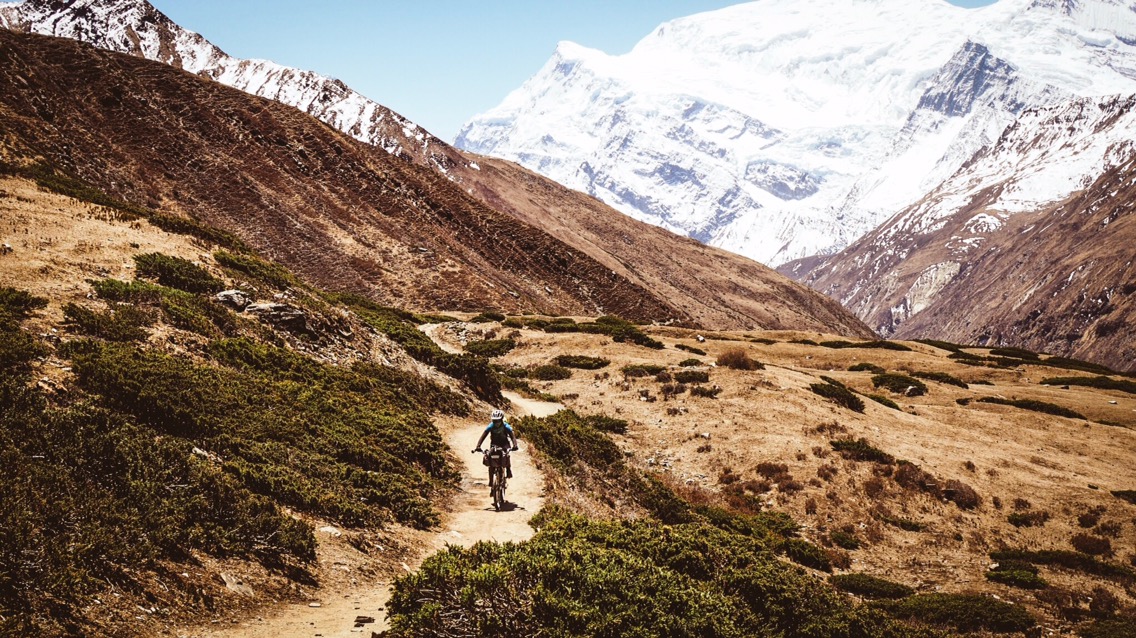 We stop for some juice before the last climb of the day. As the jolly vendor waves us off I get a horrible sinking feeling ..did she just say something about landslides? 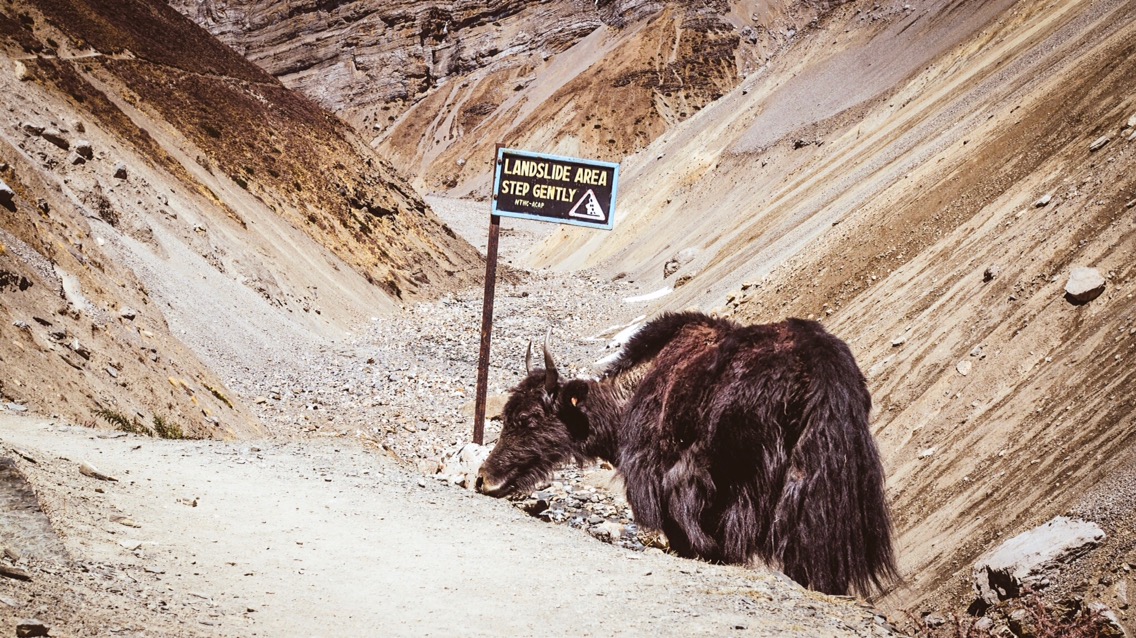 Where the path disappears around the next corner we can see two porters waving frantically, it’s definitely not the fun kind of waving.

A rock about the size of a cricket ball zips past their heads and the meaning of the waving becomes all too clear. Brilliant, at least we have our cycling helmets with us this time!

As we reach the end of the landslides I have adopted a look of grim determination. I am not going back that way for anyone, we have to find a way to beat the snow.. 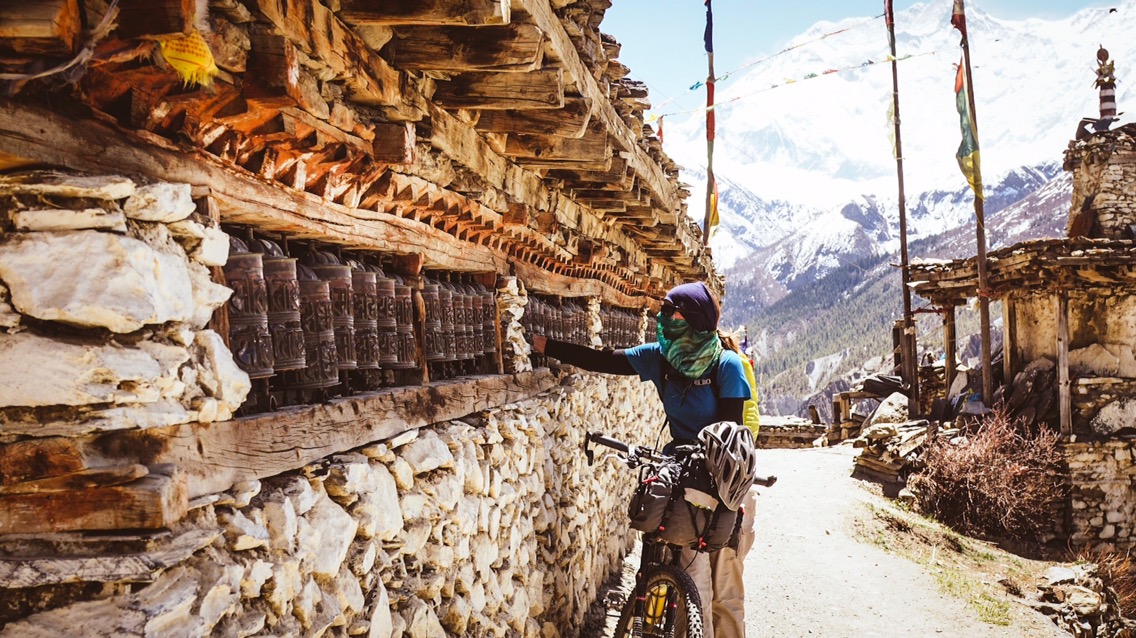 A kilometre or so later and we arrive in Throrung Phedi, a pot of tea is bound to steady my ever increasing nerves.

Inside the dimly lit tea house a large party of South Africans at the next table are only half listening to their guide’s briefing until he mentions the 4am start.

The locals tell us we should do the same, they seem worried that we intend to set off as late as 7am. The high altitude slows everyone down and bad weather is on its way.
When the mountain people of Nepal look worried with your plans you know it’s time for a bit of a rethink. The locals told us that the path to Tilicho Lake was “fine”, a path of that kind would be deemed far too dangerous and more than likely closed off in Europe. We check our progress so far and sure enough, at the pace we are moving with fully loaded bikes we will be caught in the snow.

Having read the reports on the snow storm in this valley in 2014, widely regarded as the greatest mountain disaster in modern history, we both agreed that although we really want to meet our fundraising target and complete the circuit 100% solo we need to find a way to move faster. If we can’t move faster then we must turn around…

Fortunately for us our tea house chef and his kitchen hand were more than willing to help us. 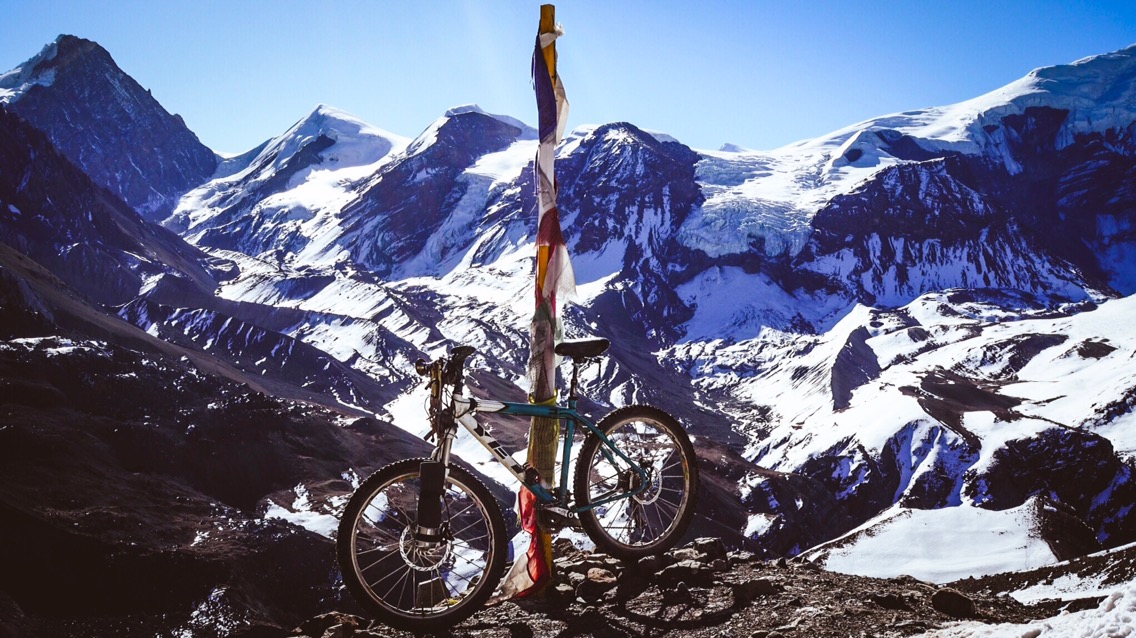 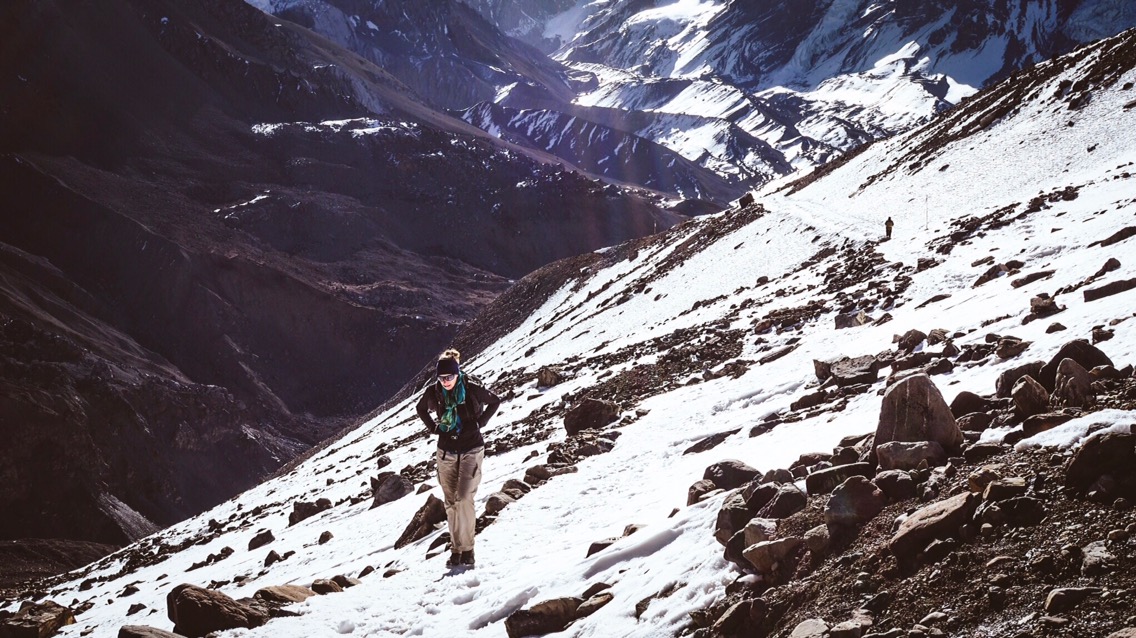 5am creeps around the edge of another sleepless night and we force as many carbohydrates into ourselves as we possibly can.
The kitchen hand takes about a third of our luggage and the chef slings my bike on his back as though it were a half empty shopping bag. Gez is still shouldering his bike, it looks like tough work so I carry his bag some of the way.

As first light inches it’s way over the mountains so we trudge our way up to the pass, our new friends always just in sight, dancing ever upwards like a pair of mountain goats. We pass several groups of tourists who have been making use of porters since they started, one group started an hour and a half before we did and another has hired a horse so they can take it in turns to rest. It seems that our slightly bonkers efforts in getting this far have made us stronger than we thought and while we are still not as strong as Nepali mountain folk we make better time than expected and reach the top just before at 10.30. 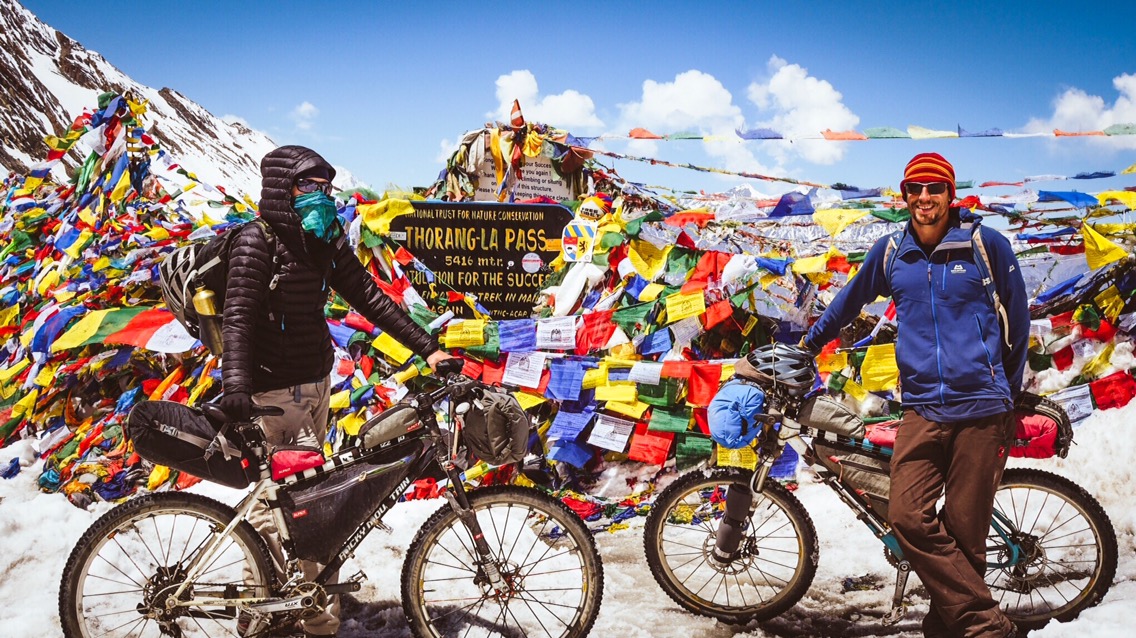 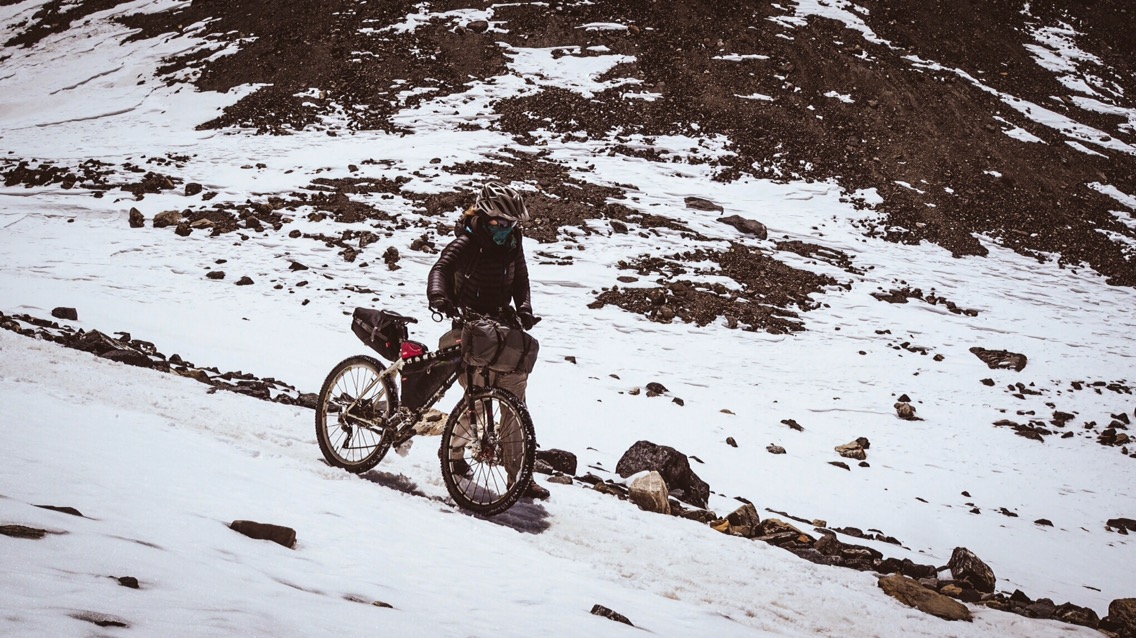 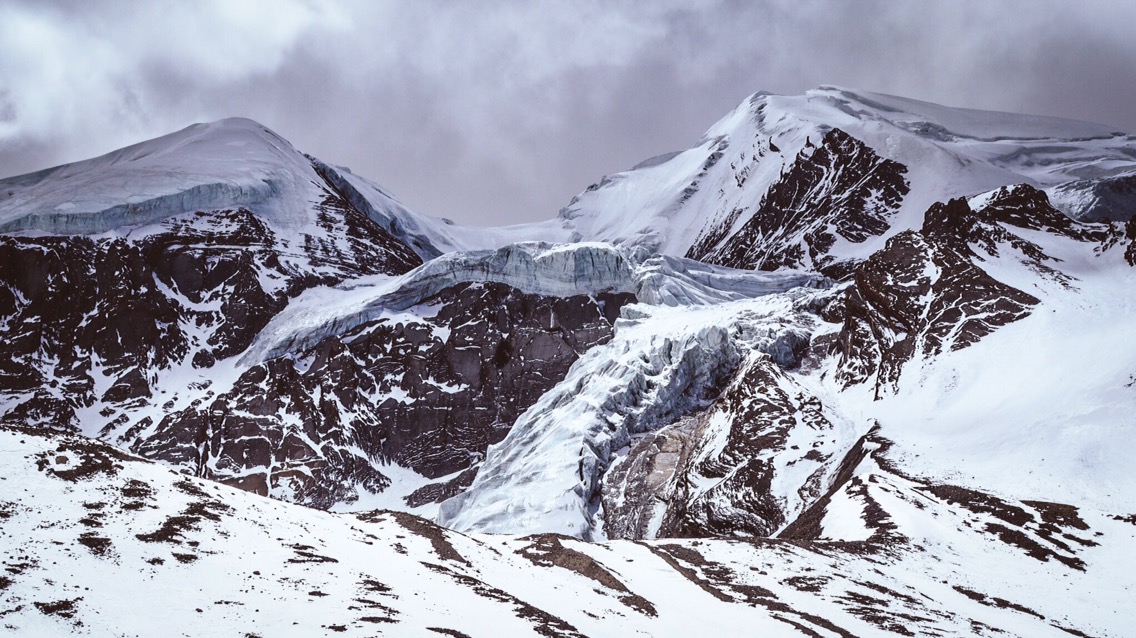 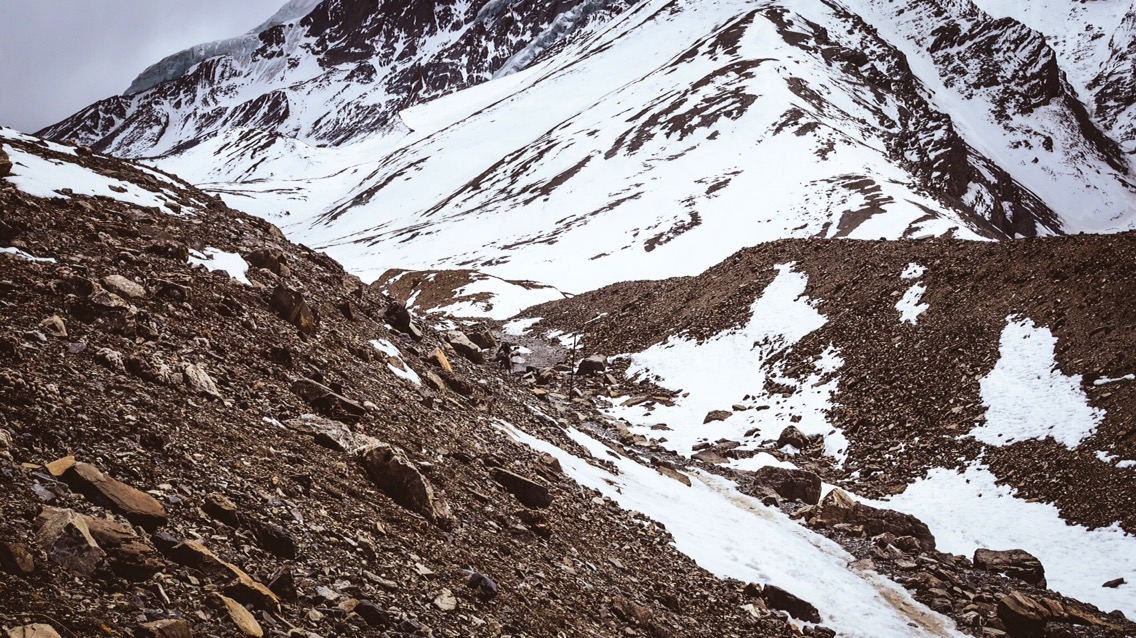 We load the bikes back up, wave a grateful goodbye to our helpers and head off as quickly as the existing snow and ice will allow. The snow clouds are only just forming as we start down the steep icy track but we know better than to wait for trouble to find us. 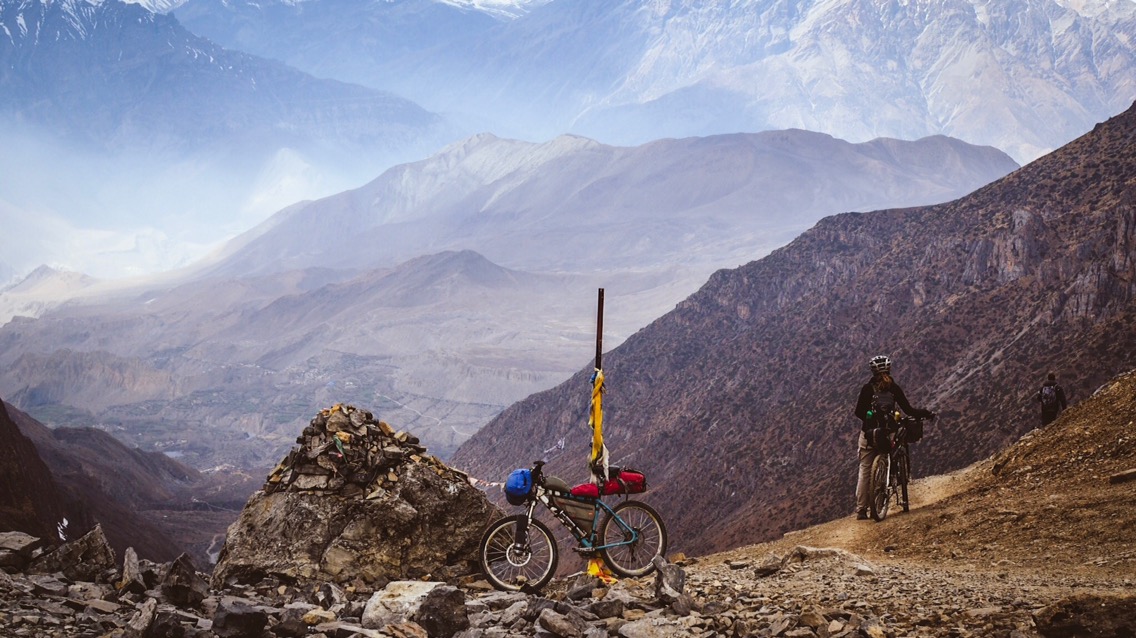 Less than an hour’s ride from Muktināth the wind becomes strong enough to blow us and the bikes back up hill and the snow starts to fall. 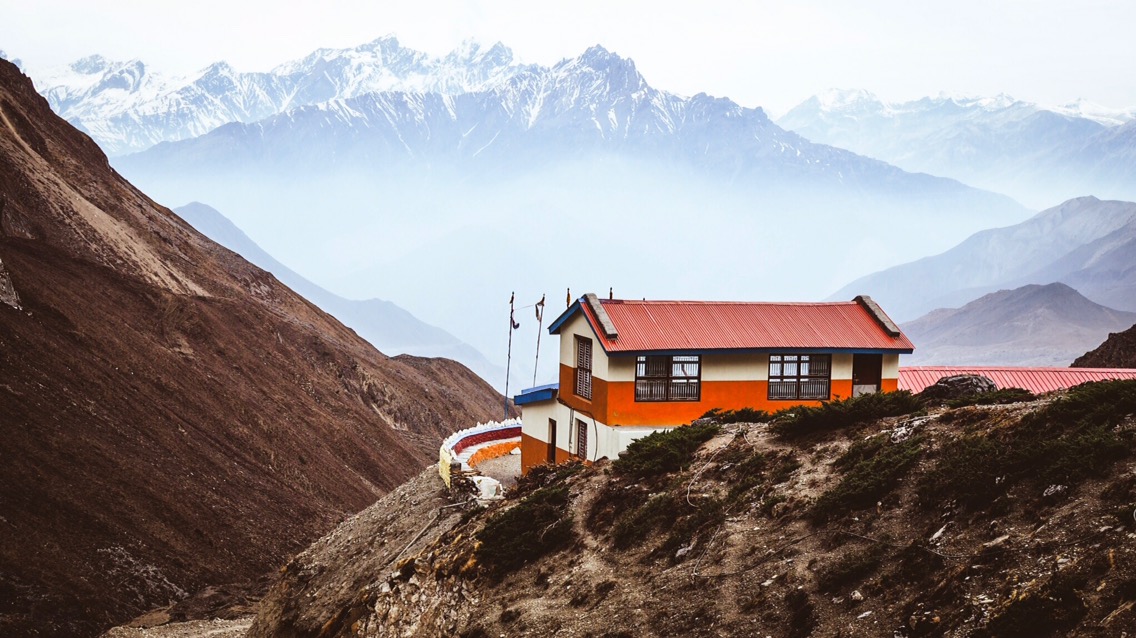 Both hungry and tired by this point, we take shelter in a tea house, becoming increasingly relieved as the trekkers we met in the pass all descended safely.

Thank you to all the lovely people who have already donated to CANepal. Thanks to you more children from the Nepali mountain tribes will be able to go to school and basic healthcare will be more readily available.

We might have made it over the hardest part o the trip, but it is far from over!  If you’d like to help us reach the end, you can find our JustGiving page here!