So it seems that we are in a race against the elements, the next few days are critical – if things swing out of our favour we could be stuck in the mountains for weeks, or worse forced to retreat.

Before I explain, let’s just recap on how we got here…

Kate and I have been cycling across Asia for about six months. We have covered thousands of kilometres on our bikes with the odd bit of motorised help – speed boats, narrow-gauge trains, tuk-tuks and one plane from Myanmar to Nepal, where we are now. 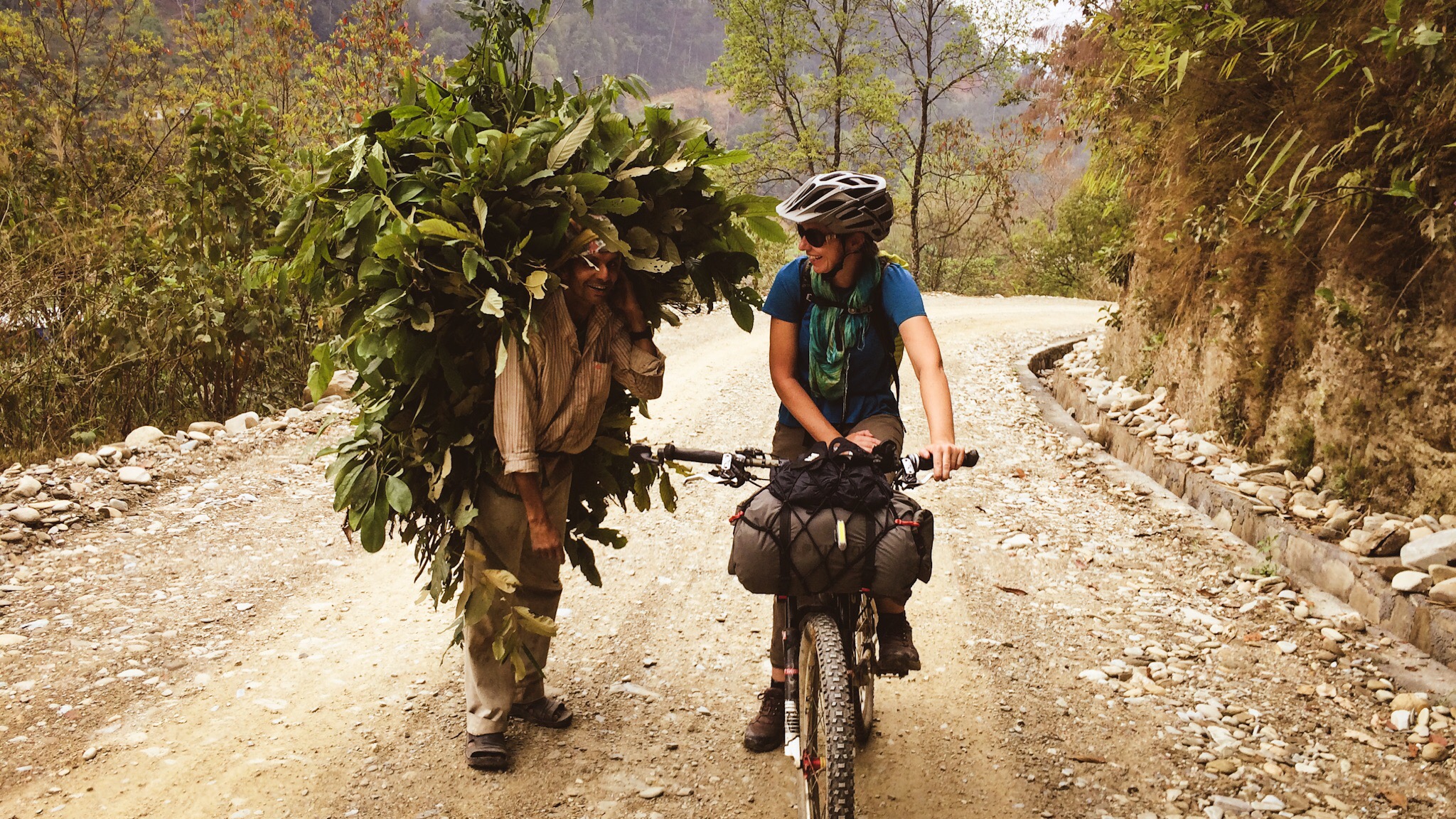 After cycling from Kathmandu to Pokhara and seeing so many remaining scars from the 2015 earthquakes, we decided it was high time that we did more than just passing through these wonderful countries.

We spoke to a few charities and selected one – Community Action Nepal, a UK based charity that was set up by Doug Scott, the first British climber to summit Everest.

After setting up a JustGiving page we planned our route around the Annapurna Circuit – an amazing (and very popular) high-altitude trekking route that is just about possible on a mountain bike, as long as you’re prepared to carry the thing.

Most people don’t do a full circuit and most people use porters to ferry their stuff to each guest house. Some even get a lift in a jeep most of the way! That of course, would be far too easy. We intend to start and finish in Pokhara and carry all our stuff, just as we have been for the last six months. 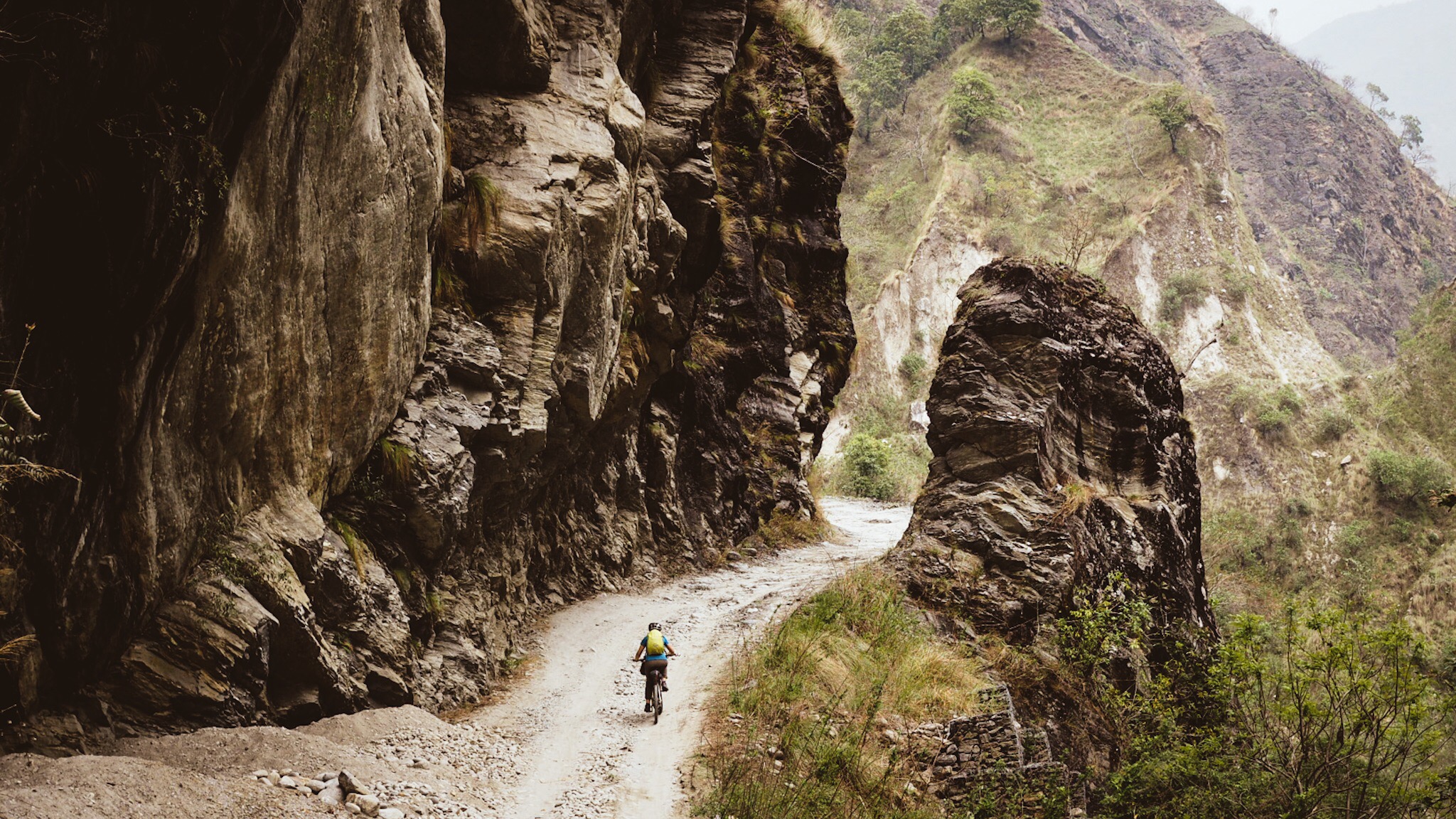 Fast-forward a bit and we’re crawling uphill on the rock-strewn dirt road that follows the Marsyangdi river gorge towards the high mountains. Huffing and puffing as our legs turn the pedals over and over for days on end, like two slightly wobbly locomotives in slow motion. The narrow track hugs the cliff face, towering on one side and falling away on the other. We’re gaining altitude, we’re making progress. 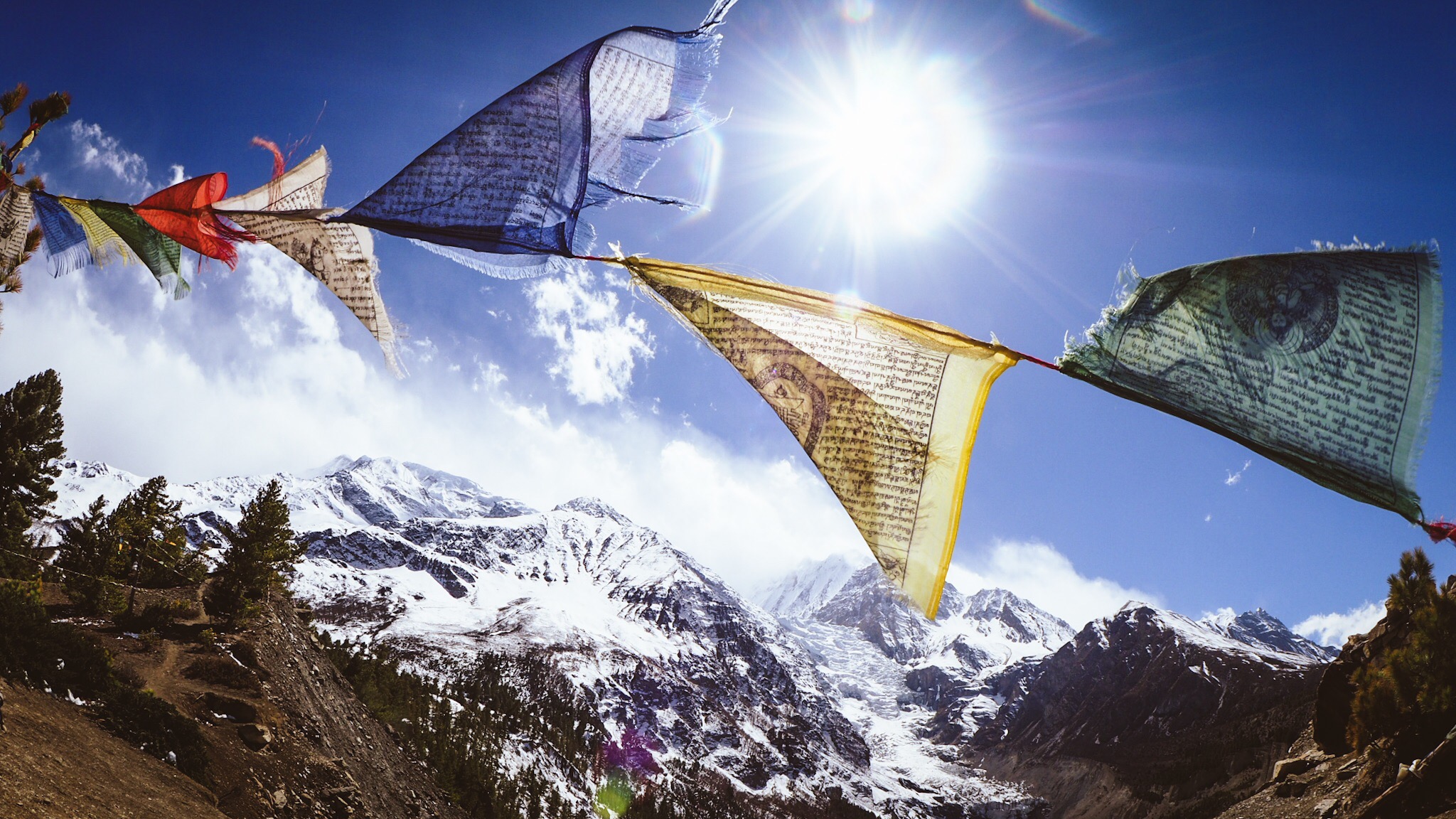 Fast-forward a bit further and we have reached a higher plateau in the mountains. We enjoy some altitude acclimatising hikes up to 4500m and sleep around 2500, 3000, 3500m – creeping our way higher slowly. 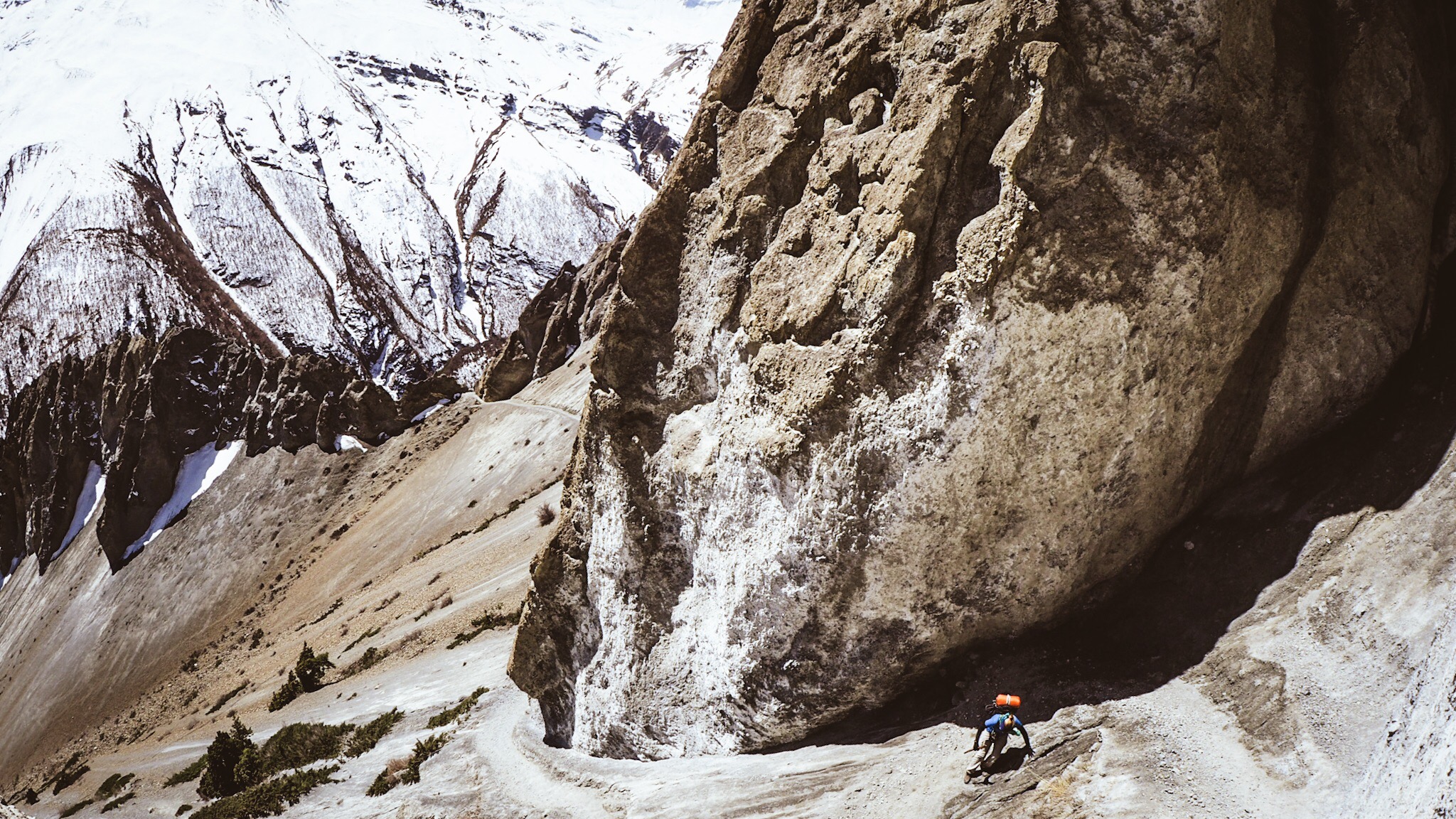 Fast-forward a again and I find myself standing on a vast, steep scree field, on our way to Tilicho base-camp to hike up to the highest lake in the world – for the view and some good altitude acclimatisation at 5000m.

The path is exposed. Really exposed. Look down and I see the river hundreds of meters below, look up and the flat featureless slope rises hundreds of metres upwards to the ridge that must be at the top, wherever that is.

I hear small rocks flying past me. They come from above down the 45 degree slope and make a sound I have read of in climbing books – a kind of fizzing hum with a touch of Doppler effect, punctuated by the occasional chisel-like clink as they bounce down the slope.

Larger rocks, now known as clonkers, fly silently downhill bouncing up to head-height with an identifying clonk. I like these ones even less.

We tread gently and swiftly, not forgetting the danger beneath our feet – one bad step and the scree could give way, sending one or both of us downward. We discuss tactics for this event, it’s ok, we have a plan. 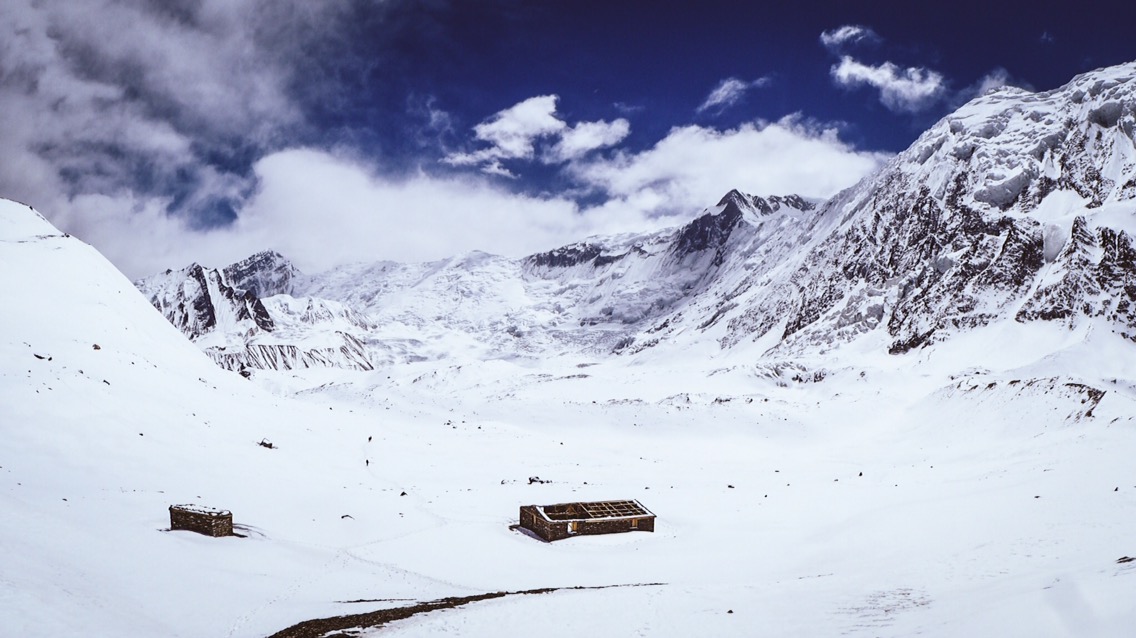 Jump forward again to recent days to our current predicament – we return safely form Tilicho basecamp to Manang, a good size village where we can resupply, have a hot shower and even wash some clothes. It snows as we arrive, but the following day is sunny and we relax. Until we look at the weather forecast. 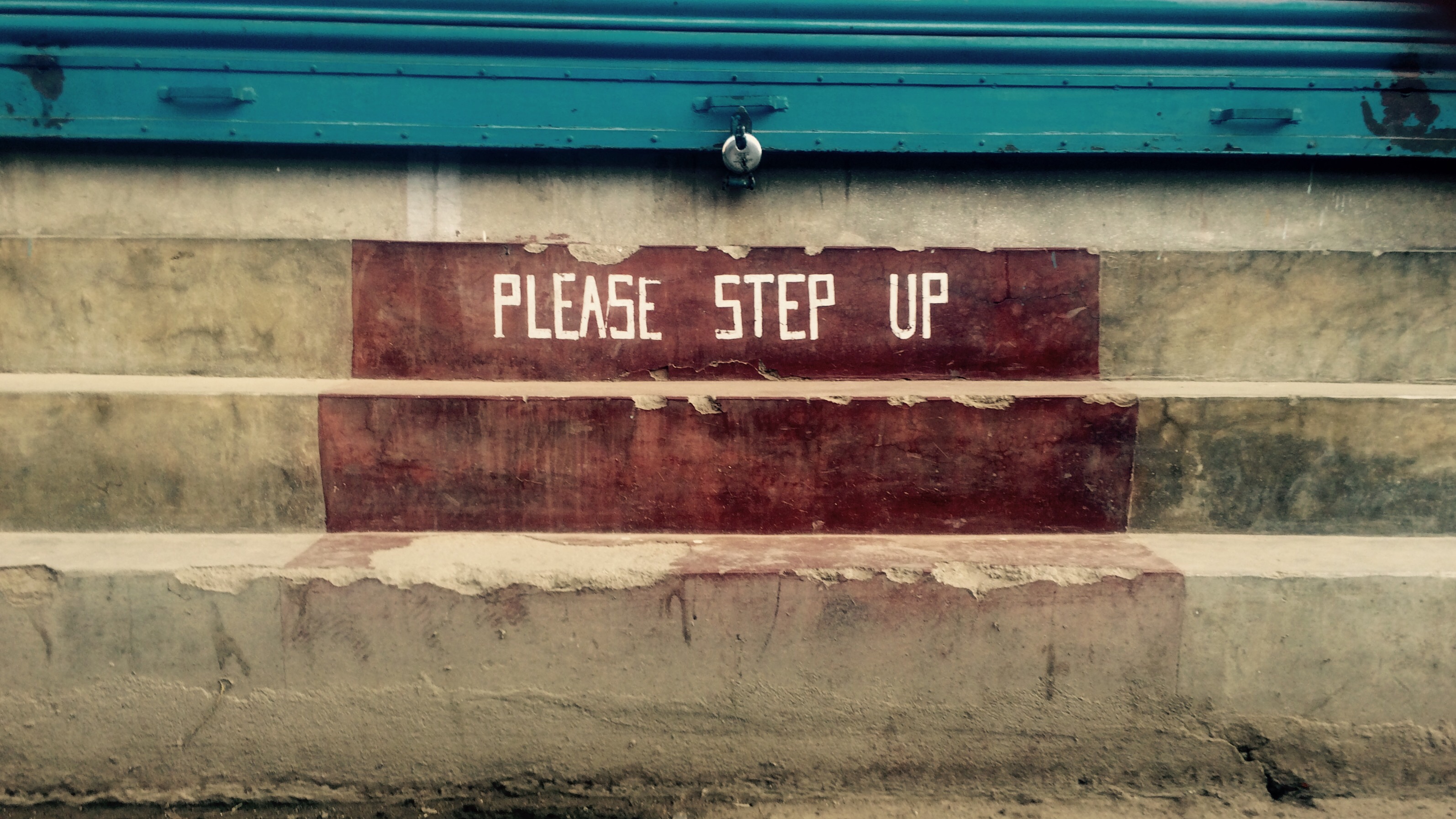 It is Saturday. We had planned to take four or five days to get over the Thurong La pass, up the valley to the north (5416m), from which it’s practically all downhill.

It is possible to reach the pass in fewer days, while not exceeding the 500m altitude rule (don’t sleep more than 500m higher than the last night).

The forecast shows snow showers on Monday afternoon and heavier snow staring on Tuesday afternoon. The one week ‘mountain forecast’ predicts over a foot in one week, and less-detailed longer-range and lower-altitude forecasts show rain set in for two or more weeks, which will be snow up where we are.

What this boils down to is that we can only just make it up the valley and to the heigh pass before the snow showers start. If the forecast stays as it is, we can climb the high pass on Tuesday morning, crossing over just as the heavier snow hits.

We would both really like some more leeway, but it looks like we’ll have to step up and go for it. We will keep a close eye on that forecast and should it swing out of favour just a bit we’ll turn our wheels back down toward Manang and dig in for however long it takes.

We’re aware of the terrible events that took place up here in October 2013 and have no illusions about just pressing on regardless.

One thing that would help us get up yet another mountain is to reach our fundraising target.. you can find the JustGiving page here!

One thought on “Please step up”