We timed our day off well.  We watched the rain fall all day from the comfort of the hotel bar where we sipped coffee and ate Spanish omelette (good, but not as good a Luli’s).

As well as escaping the rain, I think we needed a break from the Pyrenees in general – some time to sit in a white box and stare at the wall without any amazing views, interesting wildlife, challenging riding or indeed rain. 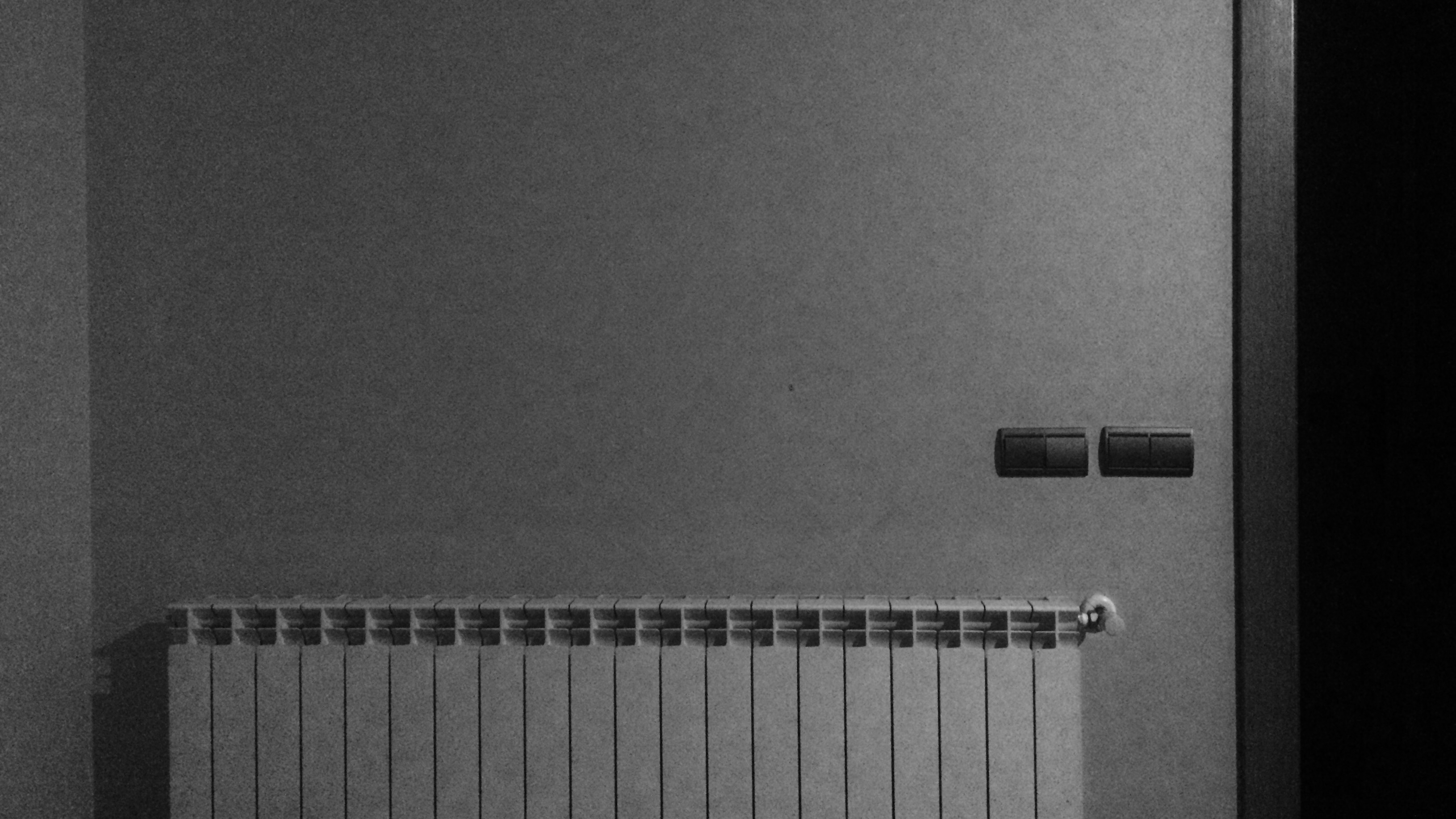 Sometimes having a day off became too much for Kate.  I’d find her outside pretending to be riding down the hills: 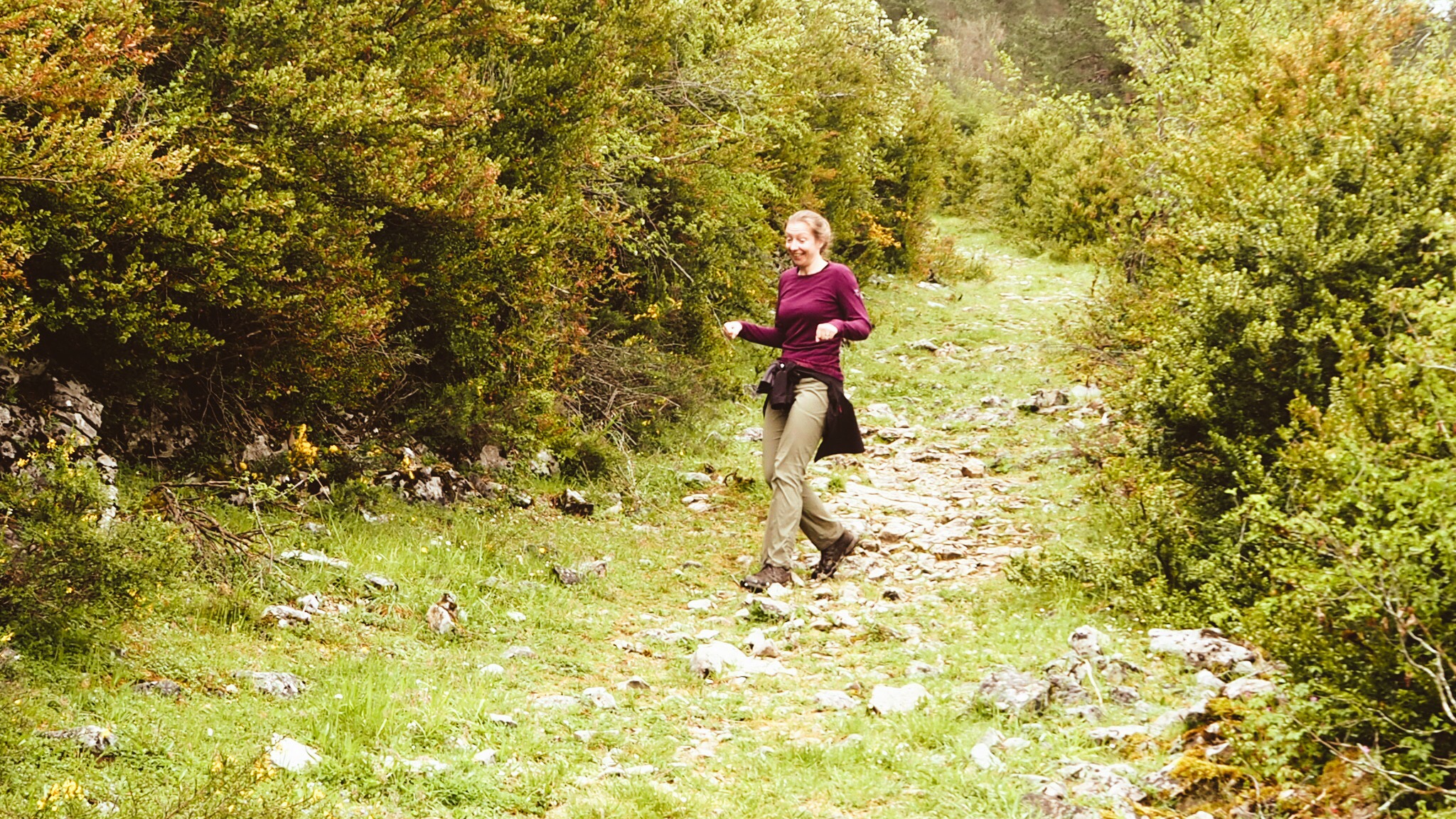 This morning we set about continuing the route – our 21st day! …but not before the rain had stopped, which of course meant more coffee and tortilla.

We were happy to finally get going around 10am.  We had 40km to cover with well over 1000 meters of vertical climb and some long stretches of footpath, which we have found can be very difficult terrain to make good time on, so we could easily be heading for a late finish.

I splash some oil around and give it another go…

5 minutes into pedaling and something is wrong.. I haven’t been able to remove the annoying ticking and jumping in my drivechain using the shifter barrel adjuster (often tweaking the cable tension is enough to to iron things out). I stop, tweak a few things, splash some oil around and give it another go… Worse. I repeat this process a few times before I finally spot the big 45 degree twist in the chain – that will do it!  It’s a good thing we have some spare links.  10 minutes and a few biscuits and we were on our way.

The climb was long – when the cloud broke we’d catch glimpses of the road traversing the mountain hundreds of meters above. “Really? More?” 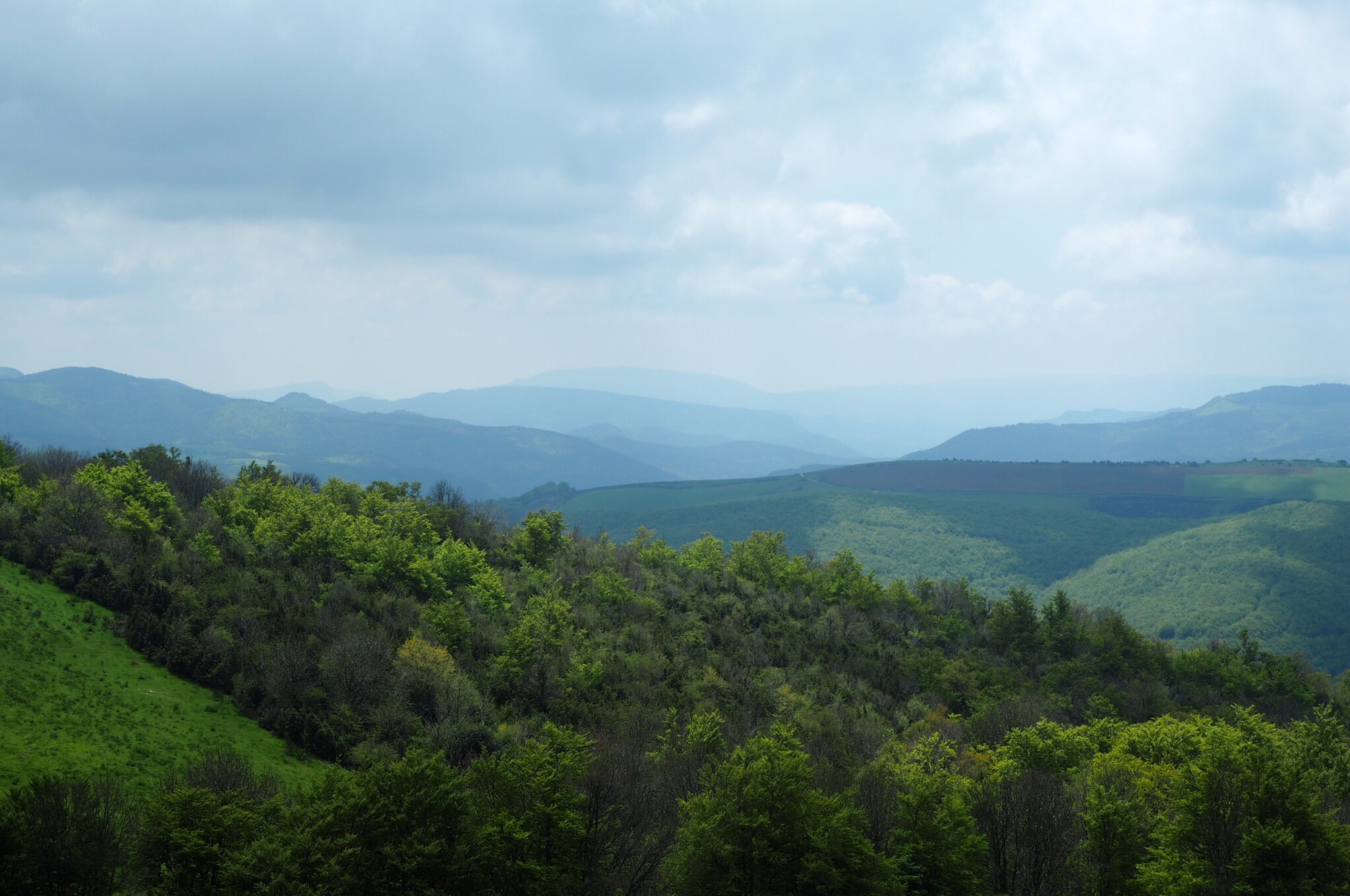 It was long but a nice, steady and consistent gradient that we both just kept plugging away at. Before we knew it we’d climbed above the gorge, into the forest, to the top of the ridge, out of the forest and found ourselves on the final stretch to El Paso de Tapla, the windiest place in Spain.

Having pedalled all the way to the flat bit at the top, we got off our bikes and walked along the edge of the road – the converse of what you’d expect, but we were trying not to be blown across the road by the immensely powerful wind. 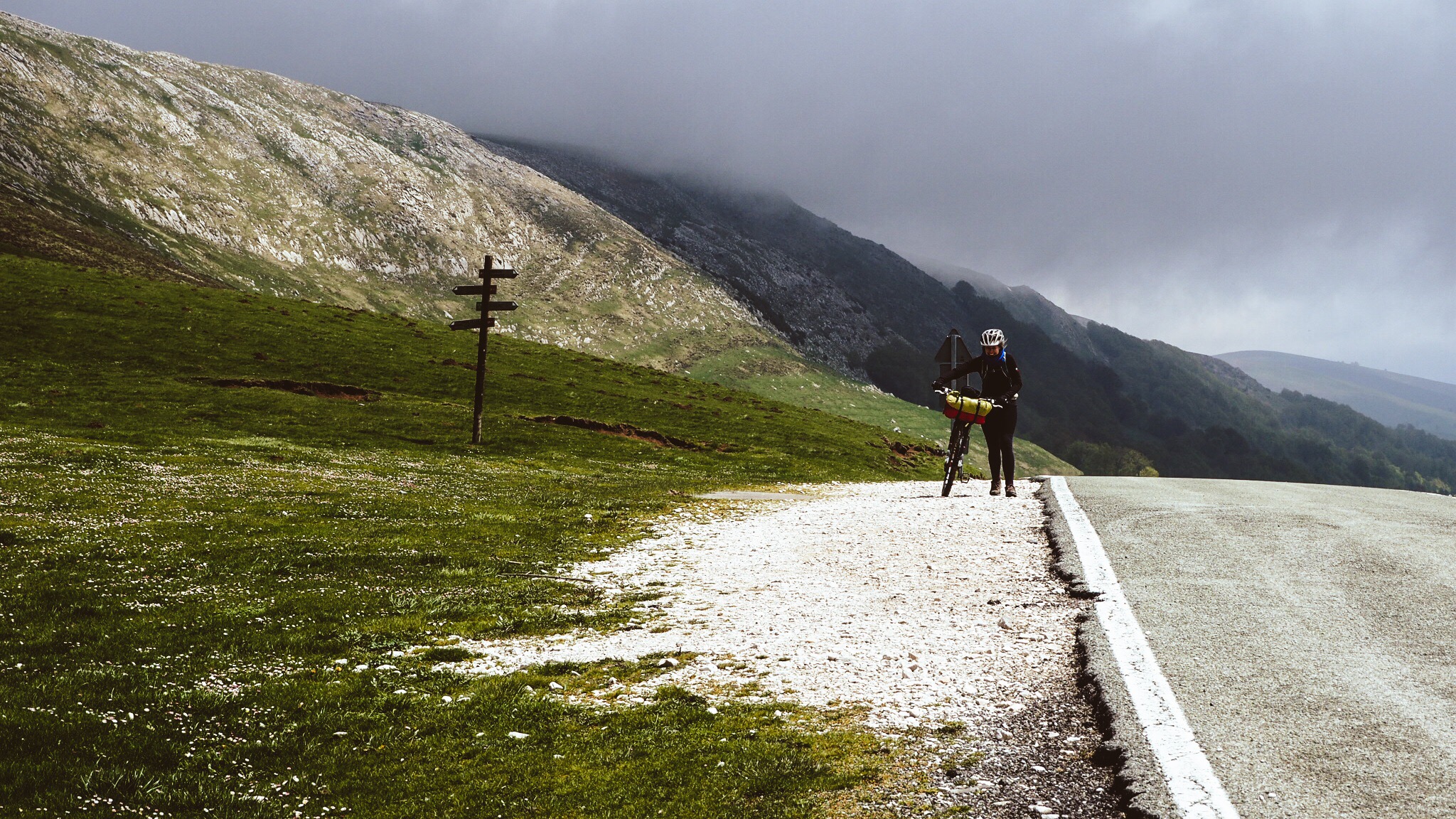 to reach some shelter would take too long, we’d start losing fingers.

It was really cold too, it didn’t take us long to figure out that we had to ride – walking down the other side to reach some shelter would take too long, we’d start losing fingers. We pedalled our way tentatively along, leaning into the wind, grimacing, waiting for the cold to stop and occasionally checking the brake fingers still worked.  (I’m not sure what my plan was if is discovered the fingers had gone, a foot on top of the back wheel probably, if I still had both feet).

This is about the point that today turned from being rather challenging to slightly magical.  We had entered some kind of enchanted forest…. (via the mystical never-ending twisting downhill entrance) It went on longer than the climb up.  I’m pretty sure my feet were defrosting from the glow of my brake discs.  The sunlight flooding into the (mostly beech) forest was something special. I tried getting photos, even through my sunglasses to capture what I was seeing, but I don’t think it really worked.

The forest was amazing, rather than trying to describe it here are some photos: 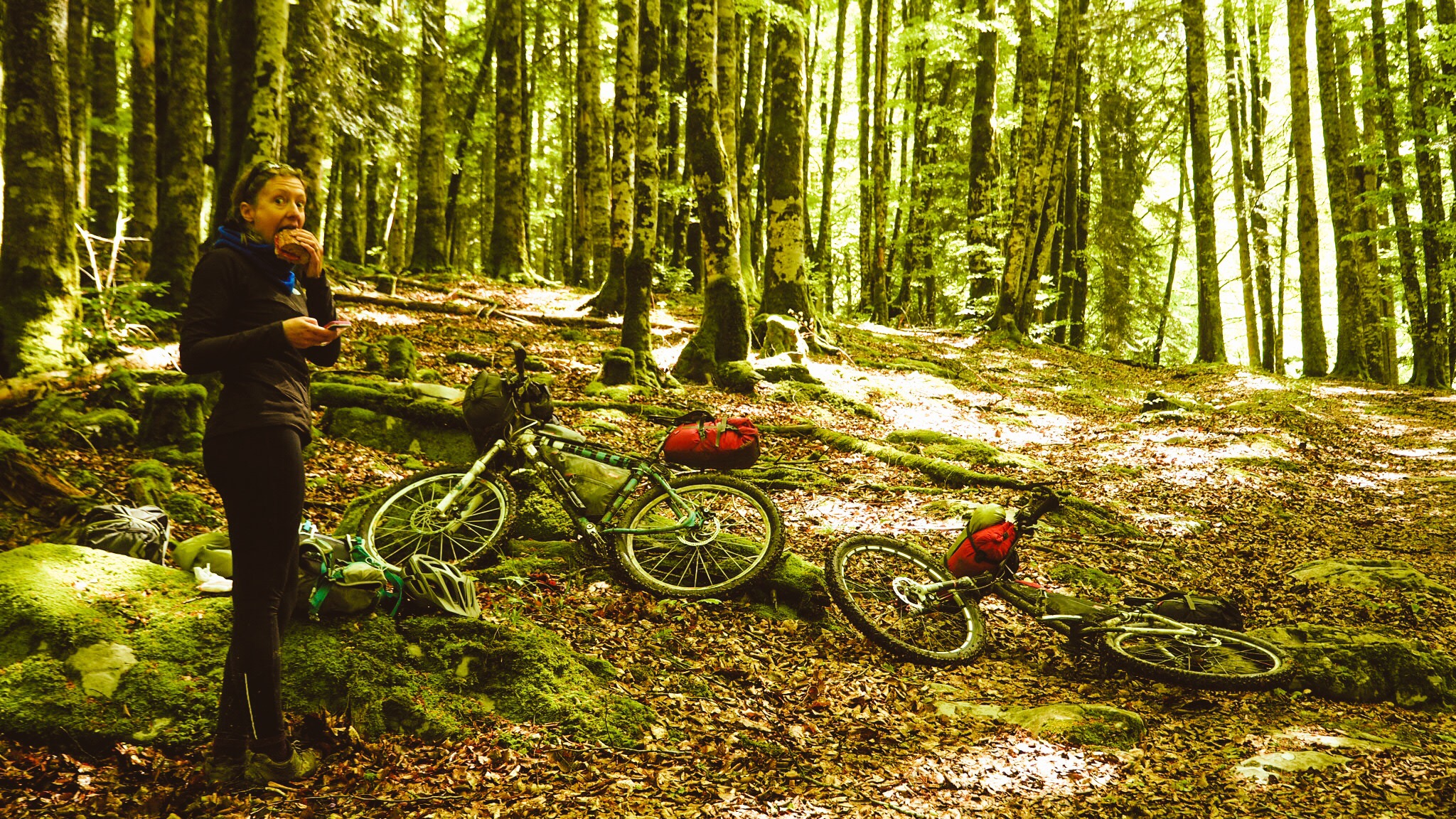 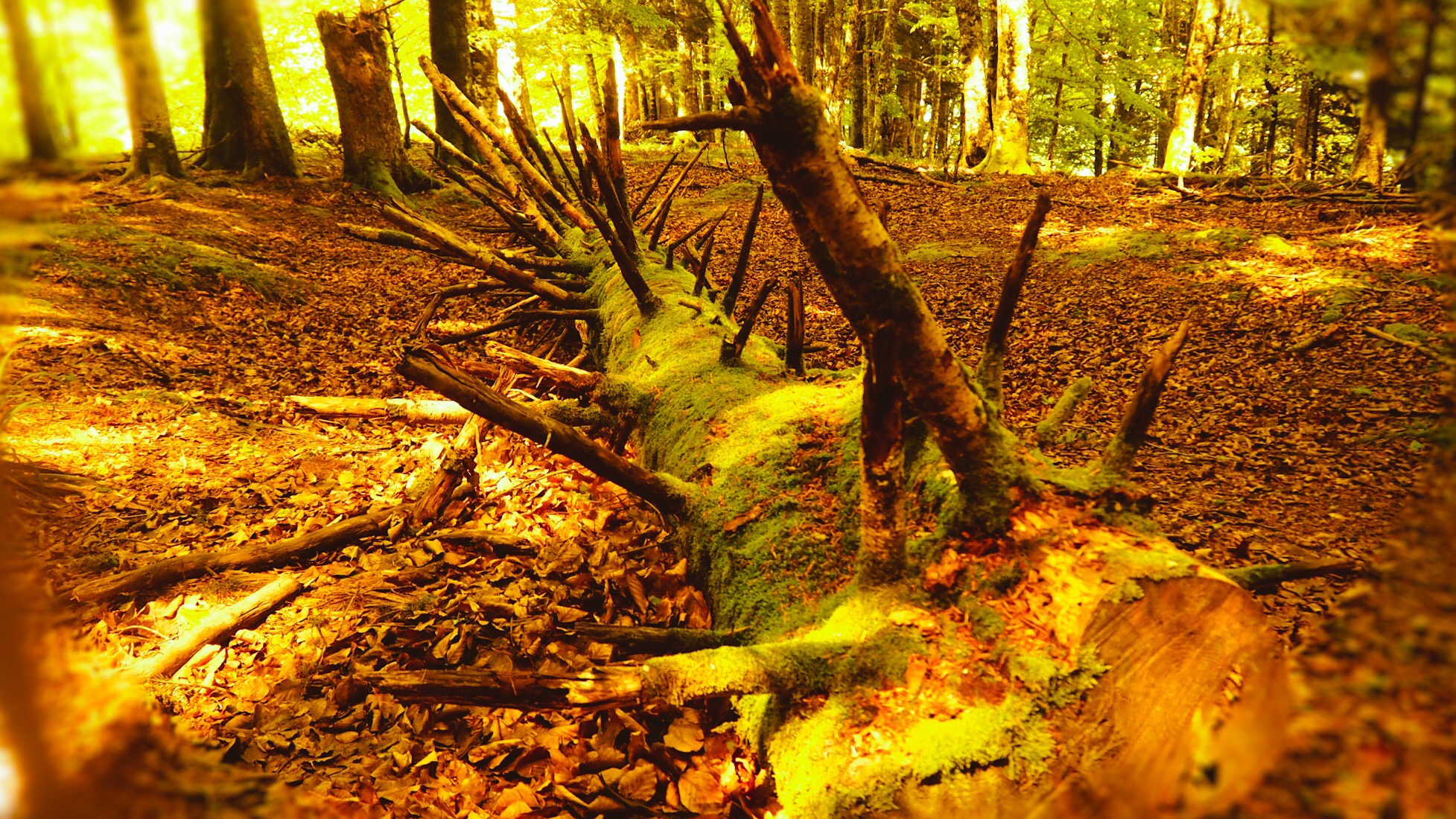 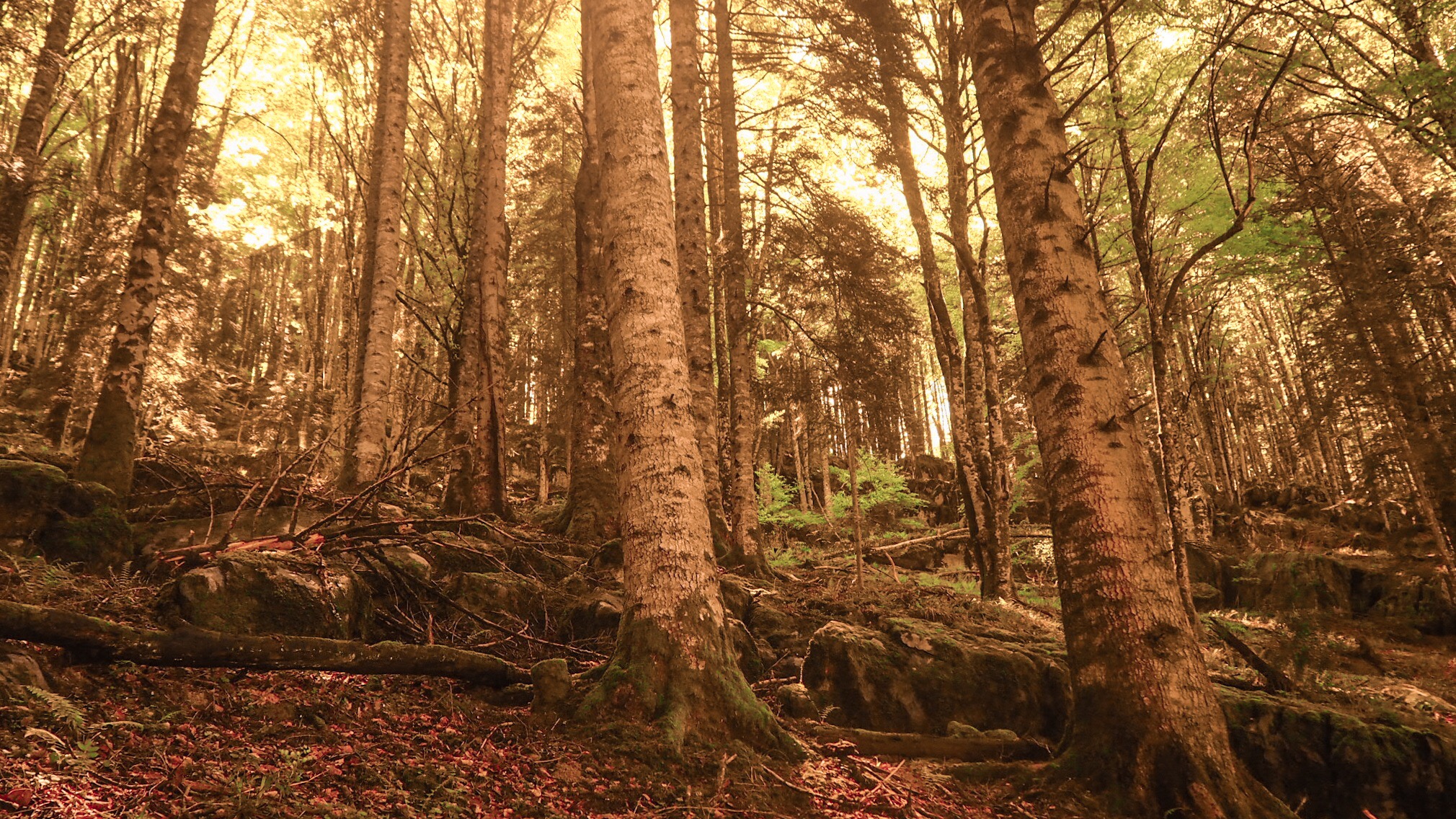 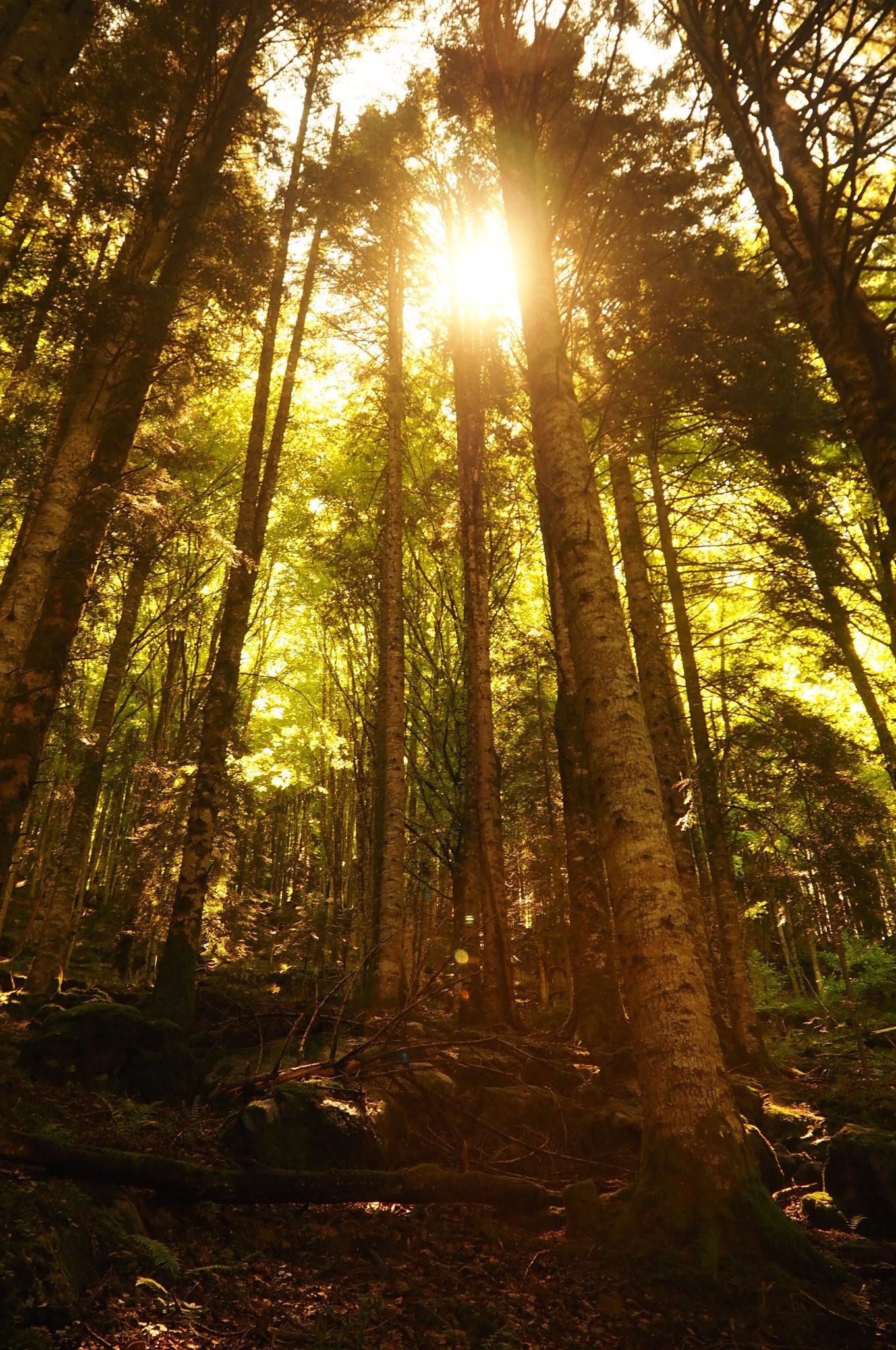 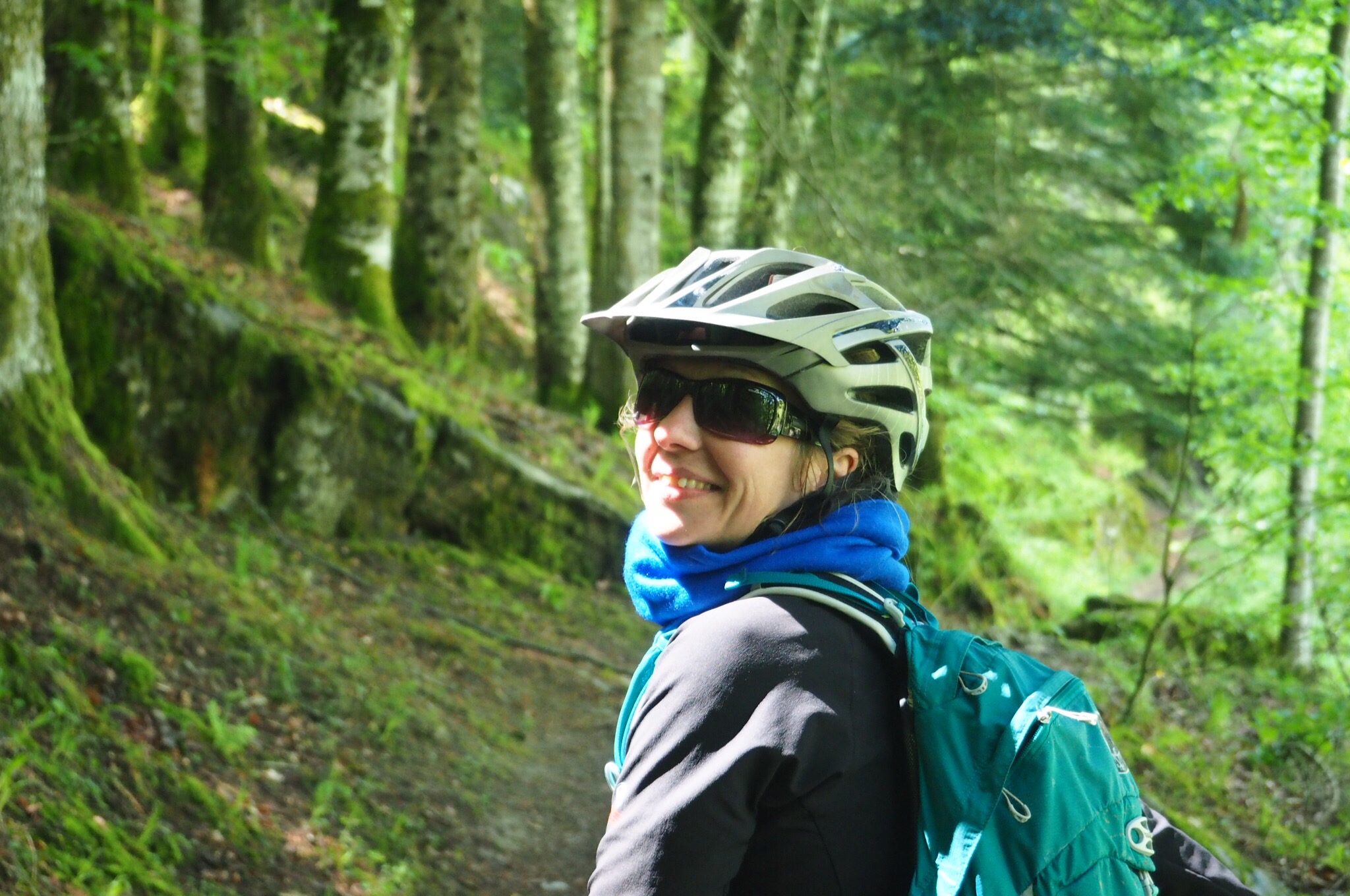 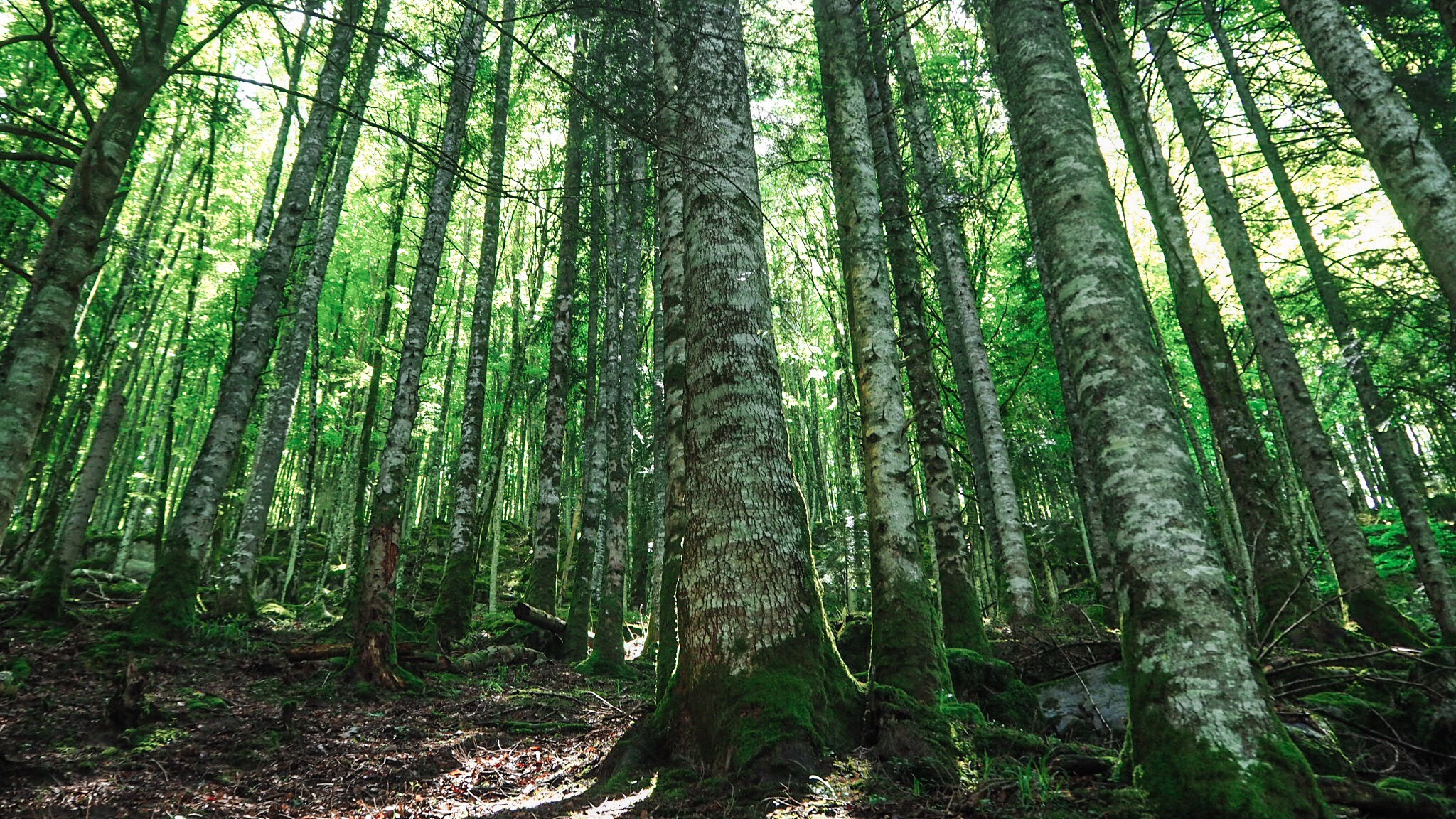 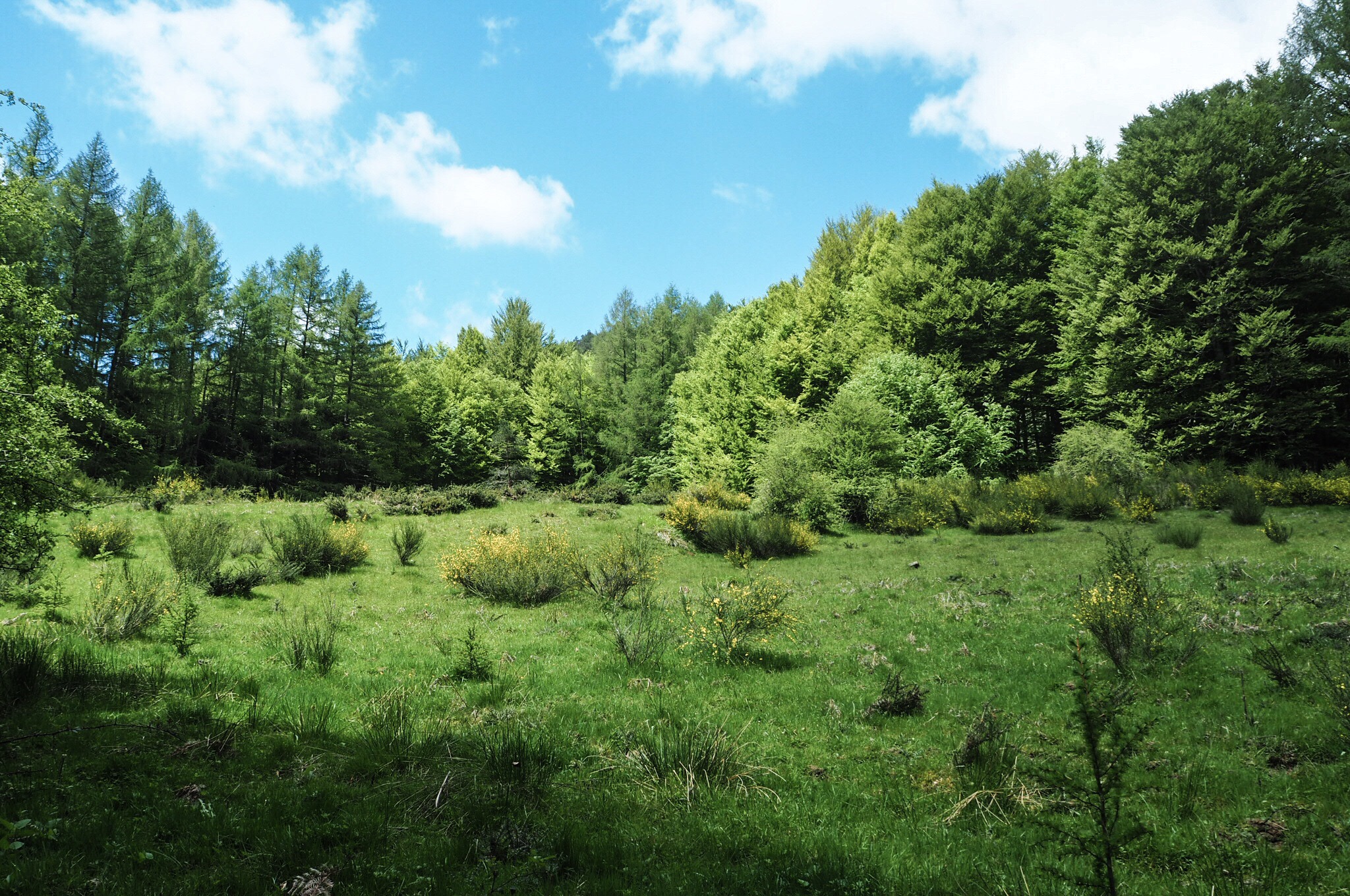 We passed a bright blue reservoir in the middle of the forest, cycles across the dam at one end and made our way west on the singletrack.  It was fun in places, but loaded bikes with tired riders meant this was slow, rocky, slippery and tough going for about 6 more miles.

The path finally widened to the track we were hoping for, but not before a couple of tumbles, some frank discussions with various thorny plants (enjoying their retirement since being extras in Jurassic park), and a brief stretch cycling on top of a concrete covered canal (which thankfully took my weight).

Orbaitzeta is a village-sized maze with a dozen entrances and no right turns.

We arrived in Orbaitzeta armed with directions: “as you come into town it is the second turning on the right”.  Orbaitzeta is a village-sized maze with a dozen entrances and no right turns. We locate the bar (the only open doors in town) and ask.. Eventually our AirBnB host Alberto strolls up, collects us and takes us to his place – garage equipped with compressor, washing machine, dryer log fire and a kitchen – perfect, we’re both really looking forward to some real veg that hasn’t been fried.

It turns out the directions were perfect, we were just exhausted and going round in circles. ¡Gracias Alberto!