My bike, a race-bred Yeti ARC, has seen better days. Aside from all the creaks and squeaks she’s developed over the first 300 miles of the Pyrenean beating: the back brake is empty – no oil, nothing at the lever. The front could do with a bleed too and I have had to put a tube in the front tubeless tyre (I know), after slashing it up on some thorns.
Without a decent pump to re-seat the tyre I essentially have an elliptical wheel, which makes for a lovely ride.
I had ridden for two days over the high mountain passes with just a front brake. It was fine really, I don’t use the back much anyway and it slowed me down to a more sensible and safe downhill pace. I might even make it to the Atlantic in one piece this way.
I had tried to fill the system with what I could find – a plastic bottle with a nozzle as a syringe and 10W-30 synthetic engine oil instead of mineral oil (how do you say “seriously, I can not put DOT in these, it will wreck them” in Spanish?).
As we were in a small mountain town, I thought I’d ask the guys pouring my beer if he knew any cyclists who might have some of the spares we needed, mainly some mineral oil and some bleeding kit (syringes, etc).

Although his English was better and my Spanish, it still took a while to get across what I was after. As soon as he understood he held up a finger, pondered for roughly 3.6 seconds, beckoned me to follow him as he walked out of the door onto the street outside.

This is promising, I thought…
He flagged down the car that was passing at that moment, spoke briefly, received a nod and a key which he used to open the vet surgery next door to the bar. He emerged not long later with the two syringes and a plastic tube (perfect size) that I needed to fill and bleed my brakes. Amazing.
“What else do you need?”
Completely by chance, I had found the Pyrenean fixer.
A swift drive around town in his landcruiser visiting various shed and garages, we had drawn a blank on mineral oil but I had a fresh supply of synthetic engine oil and a spanner. 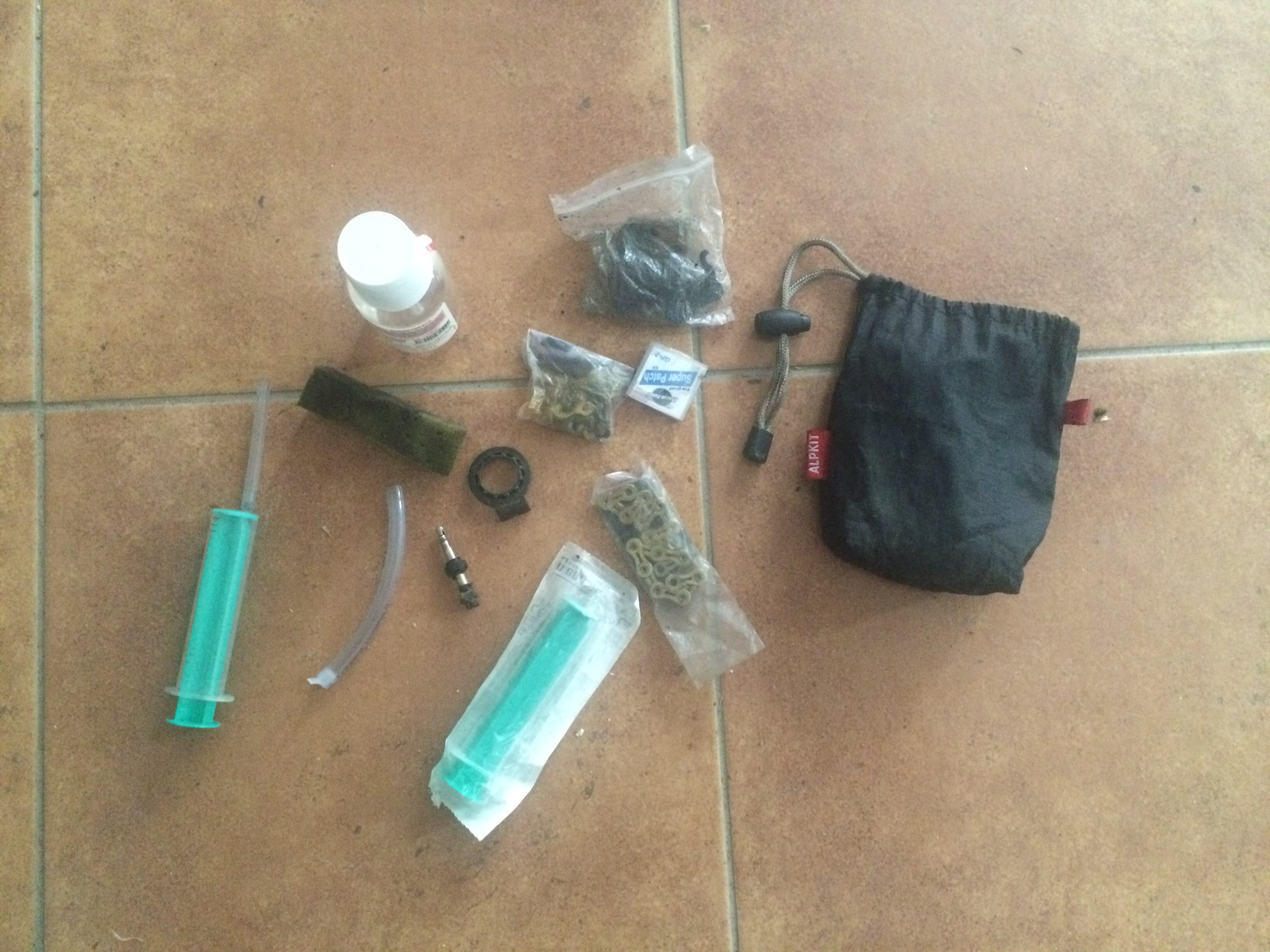 Long story short – in the morning I filled the back brake system and its working well – it’s lost some power, I guess that’s the engine oil, but it works.
I borrowed a track pump and got the tyre seated properly. Also removed the remaining thorns and fixed up the tube.